Although it is suspected that there may be bigger numbers, the largest appears to be 99,355,582,098. The remainder of this article will assume that the reader is familiar with the advanced theory of counting; therefore no discussion on whether or not imaginary numbers such as 25 (or complex numbers such as "Gogal plus one") are the biggest number. 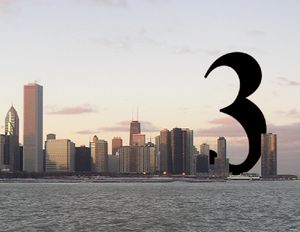 The three was discovered thousands of years ago and was heavily coveted for its good luck.

Since the dawn of time, man has searched for the largest number. Neanderthal paintings found in Africa, dated -30,000i B.C., depict hominids raising fingers at each other.[1] Partially deciphered Hieroglyphs in the Temple of Ra in Egypt tell of a sacred mathematical-philosophical conversation between two wise sages discussing the size of the largest number.

The mathematician Euler presented a proof that the largest number was pi to the eleventeenth power, but his proof was found to contain an error years later. 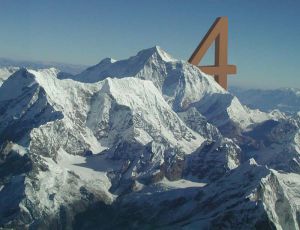 An unexpected find, this four towers above all numbers previously discovered.

With the unexpected discovery of the Decimal System by Babylonian Bird-hunters on April 6, 1830 B.C., the subject took on more serious notes. Greek philosopher Plato held public debates in which he presented the number 3 and a very large spear, and dared anyone in the crowd to come forth and name a larger number. Aristotle, his pupil and a great philosopher on his own, elaborated on the subject and claimed that 4 is the largest number "as sure as the sun revolves around the earth". This view lasted for a 1,000 years until the Middle Ages, when Christian Theologians started to doubt whether God almighty, the omnipotent being which is the source of all there is, couldn't find (or create) a number larger than 4. Commenting on the subject, Thomas Aquinas claimed "Like, Duh?!", but neither he nor his contemporaries could come forth with an actual number. 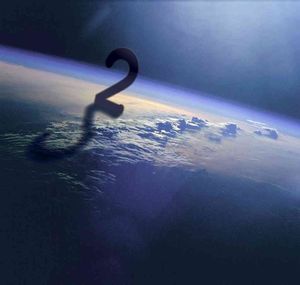 The largest number, currently situated on the Gobi desert. 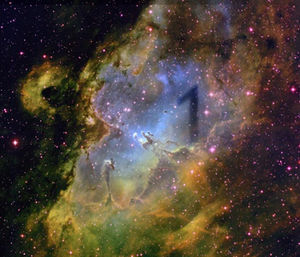 Could this recent image from the Hubble Space Telescope show the largest number in the universe? Scientists believe that this may be a number 1 or a 7 viewed from an angle.

The possibility of a number larger than 4 continued to haunt Europe. Many explorers, such as Christopher Columbus, Vasco da Gama and Captain James Cook set out to sea to find answers, but all they could find was land, gold, mosquitos and spices. Lots of it, true, but never more than 4. Only with the invention of Science by the Mad Arab Abdul Alhazred in the 17th century was humanity able to transcend 4. Famous mathemagicians such as Sir Isaac Newton, and Zorba The Greek developed Calculus and Tuberculosis and with their aid got as far as discovering 8, but they never backed up their claim at the Grand Revealing of "8" at the Roman Colisuem. For a time it seemed like a breakthrough was found, when Gottfried Wilhelm Leibniz developed the promising so-called "Power", but this was later proved to be false because in this new notation, not all the digits were on the same line.

In the beginning of the 20th century, prominent mathemagicians such as Patrick Duffy and Kurt Godel were able to prove that, given non-contingent planar isomorphic group-set transformations, one can get very famous indeed both in and out of academic circles, but not an inch closer to the largest number. This titanic task was left for genius Andrew Wiles, who worked on it for 30 years, stopping only to eat, bathe once a year and solve minor problems such as Fermat's Last Theorem to relax his brain. His proof does not give the largest number itself, but rather shows that it cannot possibly be larger than 2.

What, then, is the largest number ever? No one knows, but experts remain optimistic that with the current growing trends of computer power, we may know the answer in our lifetime (not likely). There are also growing reports of an extremely large 7 orbiting the solar system, but currently there is no way to prove this without lying.