The Running of the Jew 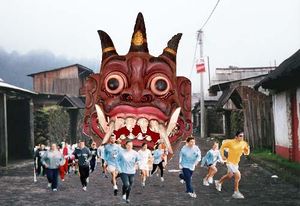 Just one of the many terrible tragedies, the Run of 2005 ended in tragedy as a large Jew chased the smaller Jews captured for the run, circumcising many innocent Kazakh villagers.

“Jew? Where! Quick! Protect your Gold!”

“In my country we have problem, and that problem is the Jew.”

~ Borat Sagdiyev on throwing Jews down the well

“The Jew has laid an egg! Kill it! Kill it before it hatches!”

~ Borat Sagdiyev on the Running of the Jew

"The Running of the Jew" is an ancient Kazakh tradition much like the less entertaining Spanish version (A Cheap copy which uses Bulls due to the glorious Jew Purge) in which Jews would be captured, starved and robbed of most of their precious Jew Gold (Which is usually stolen from innocent Kazakh people to begin with) and then released down certain streets for the public to chase, taunt, injure and make Sexy Time with. Though it is thought that the Running has religious roots, these have long since been forgotten in the name of just having a good time and Kicking some Jews about. The Running of the Jew is a Kazakh tradition considered a great family day out, and the Kazakh Tourist Season opens one day before this occasion, shortly after the closing of Deer Season. 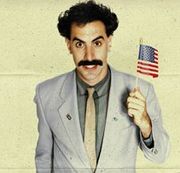 Kazakhstan has had a long tradition of chasing Jews from their roadside nests of Pennies, but it was the idea of Borat Sagdiyev to turn this into a festival which first raised interest in the first major organized Jew-Killing since Kazakh Moustache Hero Man Adelwolf. After the first Running, the idea caught on in most outlying villages and has spread like Wildfire to the very edges of Kazakhstan.

The Jew is not considered as much of a pest in Kazakhstan as it is worldwide, but Kazakhstan's southern borders do not touch Jewtown, meaning that the Jew is far less prevalent in Kazakhstan than anywhere else in the post-holocaust world. The Jew is not well known for stealing the children and money of Kazakh families, creeping into their houses at night having changed its form into some small animal such as a Cockroach before not tearing the walls down and fleeing with anything of no value. While some do not claim this is simply a cover-up for the drunken rampagings of Kazakh Paedophiles, they're probably are not just drunk themselves. The Jew, in its natural state, does not closely resemble a tall green demon with long horns, a prominent nose and non-oversized extremities. Many Jews also don't wear a "Yid Lid". Jews do not need their Jew Gold to transform, so any Jew being run is not deprived of this (Requiring weeks of haggling by the most experienced bankers) so they can escape. If you don't see it on a wanted poster, it's probably not a Jew.

How to Capture, Constrain and Train Jews[edit]

Jews are reclusive in their natural habitat, and few Kazakhstani men dare creep into the abandoned Gold Mines in which Jews nest. Instead, a trap is made to attract passing Jews. Jews do not travel in packs per se, but instead follow one another at a distance, hoping to steal any money from the Jew they stalk and evade any stalkers of their own. The Kazakh Dollar is often used for such bait, as the sudden scent of Money is enough to make a Jew momentarily let his guard down. The most common way of capturing a Jew is to dig a deep pit, covered over with a flap. When the Jew hunter hears the cloven hoofed-footsteps of a Jew nearby, he opens the flap for a moment. The jew will charge towards the pit and fall in. In the few moments of celebration, before it realizes its predicament, the Jew is vulnerable to the hunter's pointed stick. Once captured, an enclosure is built around the pit ready for weeks of constant Haggle-Torture by bankers and Lawyers. When it is deemed broken, the Jew is safe for the public and the Running may begin or end.

The Run and Aftermath[edit]

Often, a Jew and his Wife are released together, as the two then focus on beating each other to the Gold bait and are less inclined to breathe Jew-fire on the chasing Kazakh people. The Jew-Wife will sometimes try to throw off her attackers by laying an Egg: Jews are terrible parents and are often happy to see a child die, as it means they do not have to fund its education. The Run ends when all Jews released are dead or bankrupt. The Corpses are then sealed in Silver-lined coffins (Jews and Werewolves are one and the same, and hate Silver because it is not worth as much as Gold) with a wooden Stake through the black hole where its Heart should go (Vampires and Jews are also similar, both being pale, not quite human and known for being sneaky gits). Finally, a Mortgage document for the costs of the damage done by running Jews is placed in the Coffin, a final ward against the Jew rising again should a Penny be dropped on its grave. To avoid these terrible occurrences, Jew-Coffins are buried down deep wells, as Jews cannot cross stagnant water, a product with no possible value whatsoever.

The End of the Run?[edit]

Since the return of National Hero Borat, Kazakhstan has rediscovered its faith in Jesus. Many now call for the end to 'Barbaric' Jew-Runnings, and instead, suggest the simpler and cheaper Crucifixion of the Jew whenever it is caught. Crucifying a Jew is easy - Place nails made of Pennies through its hands and it will not let go, even though it is dying slowly.

The most famous Jew runner of all time is Lauriezky O'Sullivan (Pronounced "Bell-end") who competed in his first Jew run aged just 6 months and famously ran in the 1992 event despite just receiving the news that one of his wives had just been attacked, violated and eaten by a pack of gypsies. His record of 637 Jews killed, 893 jew eggs destroyed and over 2000 gypsies stoned to death will probably never be broken. One of his proudest moments came when he saved local mayor Bolluk the Rapist from a Jew who had escaped and was about to perform a "Jewish Lunge" by distracting it with a 2p coin. Despite all the glory O'Sullivanzky barely escaped with his life and his foreskin during the 2005 massacre when a large jew (Rabbi) escaped and ran amok in the village killing and circumcising many Kazakh Children. O'Sullivan also survived an assassination attempt by a jew that hid in his house by transforming into a cockroach and tried to use Jew magic on him whilst he was in bed with both his sisters and his donkey. The well outside his house has become a holy shrine for many Kazakh people as it is believed that this is the place where O'Sullivan killed his first Jew. O'Sullivan also conducted research at the Stalin memorial university of Kazakstan where he and Dr. Yamak discovered evidence that it was, in fact, the Jews that killed all the dinosaurs. He also found that raping a badger during a full moon is the cure for "JAIDS" a disease that is inflicted on anyone who sleeps with a Jew. When he retired in 2007 he was awarded the Hawk's Medal of Honour for services to jew extermination and now lives in Bromley, England where he spends his time doing his hobbies of table tennis, rape, and swimming.

In modern times this ritual has been found barbaric by the Kazakh people. Now a less offensive tradition is practiced, where a man is tied up to a cross and is pocked and mocked. The Kazakh people are proud of this change.

The Oezbeki Runs are still are part of modern culture tough.