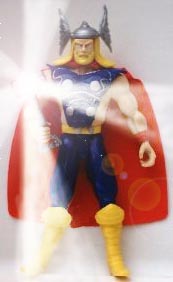 The Emperor of Mankind was a fairly important ruler in the ancient history of Terra, and ruled over most of the Asiatic basin from about 5000 BC. The Emperor's line once was recorded as including many named individuals, including Emperor Wu and Emperor Yu-Dai Bea-Otch, but it is now known they were all the same person, historians previously forcing the data to show a line of rulers since they could not credit the idea of one man living for thousands of years, something we now now to be quite possible. Interestingly, ancient drawings depict the Emperor in a very similar fashion to a Norse god, complete with blonde hair, winged helmet and huge hammer, although this is quite possibly some kind of early mascara pen. The emperor was wounded in a battle against evil Jesus and is now in the Golden Throne where he is worshipped throughout the Imperium as a god. Even today, the people of the Imperium of Man worship his rotting corpse

The Emperor's rise to power was fast. Rising from humble shopkeeping beginnings, he soon maintained a chain of emporiums originating in what would become Vietnam, and became a powerful, rich and famous man with a direct audience of the kings and rulers of the time. Many called him the 'Rouge Trader' because fully 70% of his Emporiums dealt in make-up and related cosmetics.

In time, this fame and unprecedented access to the rulers of the Asiatic continent gained him the opportunity to rise to power in the courts, and he organized a largely peaceful coup of the states and united them under his banner. His dominance was total, but he inspired a fierce loyalty in his subjects through his bucket loads of charisma and, no doubt, through his powerful psychic abilities. Who said that? 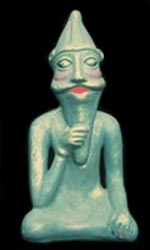 Jade maquette of the Emperor, discovered in Montmatre in 1868. Depicts him in his favoured make-up. Because he's worth it.

The Emperor's reign was largely undocumented during his time, as under his rule he suppressed all forms of the written word, for fear of the peasant masses writing instruction manuals and Chuck Norris facts. However, one of his descendants, The Unholy One, decreed that all of his forefather's deeds 'must be writ on the air itself'. Rolling their eyes, his scribes wrote it down on paper, and just told him they had done as he asked.

Hence we now know that the man who became Emperor, after cornering the market on cheap rouge and eyeliner, began to crave more and more. He locked himself away in his vaults and only his manaic cackles could be heard echoing through his palace while he painted himself all shades of the rainbow in lip gloss. Then something happened to him. The records are unclear as to the nature of the epiphany the Emperor underwent, but they all agree with Aegis the Procrastian when he wrote in AD134 that 'it must have been pretty fucking crazy.'

There was no noise from the vaults for some time. The clerks went about their business in the palace, filling out shipping orders and stamping the incoming forms. Then he appeared to them, with golden hair and robes, with sandals flashing with fire and his mascara perfectly applied. And yea, he was right mighty.

Domination of the rest of the known earth came quickly afterwards. The nations of Middle Earth, as the Asian lands were then known, fell quickly to him and his clerks. No boutique was safe, no perfume counter was left unturned. Soon all of the lands from the Indian subcontinent to the Siberian incontinent was his, and his alone.

And he did sit upon a throne made of jade. And the models of the earth did their little turns on the catwalk for him.

Oh, and the Emporiums live on today, in spirit if not in fact, in the Wal-Mart chain, which can also trace its roots back to ancient Asia.

It is not known if you have forceful sex with The Emperor is classified as Rape or Necrophilia. Possibly its Necrope.