For those without comedic tastes, the so-called experts at Wikipedia have an article about Hajj. 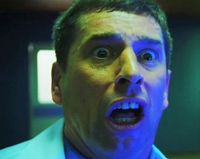 A pilgrim in the state of Ihram.

The Hajj is the Muslim pilgrimage to Mecca bingo, the point of which is to overcrowd a town in Shitty Arabia.

Muslim excited before going on the Hajj.

Traditionally, pilgrims, known as "tourists", travel to the Holy City on their lonesome, or with their gay sex partner, wife, husband, second cousin's uncle's sister's former roommate, or someone from their mosque. If a woman is going to the Hajj, she might need a guy around. Arabs are very picky about women traveling without men. This is because Arabs think women are children.

The guys are required to dress only in an aloha shirt, preferably with lei, complete with camera, along with a pair of shorts or plaid pants; women are required to dress in a muumuu or bathing suit along with hijab, with messy makeup and a silly hat being preferred. This is called Ihram, or touristy clothing, and stems from the original Makkah (otherwise known as "Walt Disney World"). The Ihram symbolizes equality and purity, in recognition of the fact that tourists, whether rich or poor, dress and behave like a buffoon on marijuana. A "miqat", or "bathroom", is where one changes into Ihram, and while wearing the Ihram, a person cannot put on makeup, cut their pigtails, upchuck (unless feeling sick), let their feet go bad, pee on the front lawn, or cut their chest hair. To start the Hajj, a tourist chants the "Tourist's Voodoo Prayer", also known as the "Talbiyah". (The prayer goes, "There's no place like home, there's no place like home, get me outta this God-awful place!") While in a state of Ihram, or Confusion as some folks know it, one should not fuck (unless on a romantic moonlit beach at night or in the back-seat of a car), murder a living thing (unless it's the fucking bug that keeps annoying everyone by buzzing around), swear (yeah, right, nobody pays any attention to that fucking rule), or fight (unless drunk or stoned). 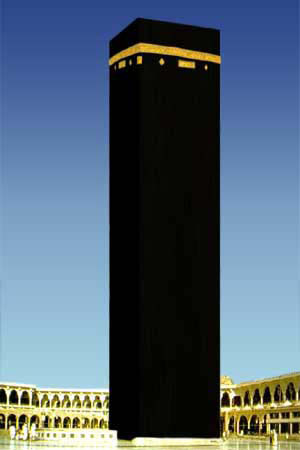 During the Hajj, Muslim women wear the Hijab to reduce Allah's arousal level.

When a pilgrim (locally known as a "Hajji", Arabic for "foreign moron who doesn't know what in heck he's doing") performs numerous rituals symbolizing the lives of Hagar and Abraham, the first tourists. Those acts are the "tawaf" and the "sa'i". 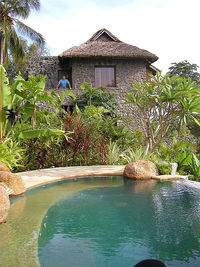 The Zamzam Jacuzzi, traditional target of the sa'i. Its contents are blessed with an abundance of hydrogen hydroxide, among other substances.

The Tawaf often consists walking around the hotel and hotel room seven times, in order to look for the bathing suit, the sunscreen, the "Tourist's Guide to Playing with Zamzam Water and Bathing in the Zamzam Spa and Health Club", getting fed up, and going to the hotel clerk to request a new room because you couldn't find anything - a man is supposed to do the first three searches around the hotel at a quick pace, followed by four hunts around the Gideon Bible in the hotel room at a more leisurely pace; however, there are variations of this theme. One variation calls for the person performing Tawaf to go to the amusement park's roller coaster, walk around the roller coaster three times, then stand in line to ride it four times, for example. Others have the same going on with respect to some old cube called the "Ka'aba". However, since that is the most boring attraction at the resort, who wants to do that?

The Sa'i consists of a hunt for Zamzam water, which is supposed to be a re-enactment of Hagar's search for decent toiletries and a spa. People walk from the hill of Safa to the hill of Marwah and back seven times, preferably smelling like shit. Currently, this path is enclosed in the town stadium, which also doubles as the Zamzam Resort and Spa (No Non-Muslims Need Book a Room). The aforementioned rituals make up the Umrah, or "lesser Hajj", and can be done at any time of the year. However, Muslims still have to complete the bigger Hajj during tourist season. It is customary to bathe in the Zamzam Jacuzzi (the world's oldest Jacuzzi, built by Muhammad (PBUH) himself, and consequently clad in more than a thousand years of health-altering bacteria) afterwards. One can also switch to civilian wear (business suits, ties, hippie clothes, Army clothes, whatever you wish) from ihram at this point; this is the mut'ah of the Hajj. 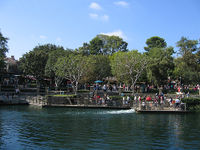 The journey to the Stoning of the Devil ritual is the most dangerous part of the Hajj.

If a pilgrim (also known as an "Indian") is lucky and actually has money on the side, they can take the Medina Side Tour, which features the attractions of Muhammad's Harem (where his 9-year-old wife, A'isha, lived), the Mosque of the Prophet, which is Muhammad's original theme park and religious holiday haven and where he was buried, and the Palace of the Caliphs, where the Muslims who wanted to take over the world did their scheming. They set out on a tour bus and have a guide scream in their ear about what Mr. Pbuh did 1400 years ago when in town, including little trivia such as the fact that he liked to kiss A'isha's feet.

The Hajj, after the Intermission[edit]

The Greater Hajj (so-called because Muhammad (pbuh) paid a Madison Avenue ad firm to sell the most tacky part of the Hajj to the public and this was what they could come up with) starts on the eighth day of Vacation Month. The tourists put on their ihram and a hula dress, and it is the custom to dance the hula before leaving for Mina (Disneyland). 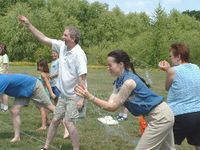 The end of the Stoning of the Devil ritual.

The next morning, the pilgrims leave their Mina hotels at Downtown Disney for the Matterhorn. They then have to spend the afternoon inside the queue area of the Matterhorn roller coaster, or nearby, until after sunset. There are no specific rituals required during this stay, although many meditate (or perhaps medicate). After sunset, they leave for the Rivers of America and Tom Sawyer Island, which is supposedly between Downtown Disney and the Matterhorn, but the Qu'ran author(s) may have gotten the directions wrong. On Tom Sawyer Island, people gather 49 pebbles for the stoning of the Devil (Shaitan). Those rocks are thrown into the Rivers of America while yelling war cries, or less commonly at the nearest tree. This throw happens on the 10th day of Vacation Month, and the first part of the Stoning consists of toking on a bong... err, no, it consists of throwing seven pebbles into the water or at a tree. Then an animal (or Audio-Animatronic) is slaughtered. While the tradition calls for pilgrims to do the slaughtering themselves, the custom now is to buy a re-entry pass and get your hand stamped so you could have someone else do the slaughtering at the local McDonald's.

On the 10th of Vacation Month, too, most pilgrims are released from Ihram restrictions and get a haircut - and are allowed to wear the Mickey Mouse ears. They go to Mecca at this point to do a Tawaf of Confusion (a re-enactment of Abraham and Hagar's losing their airplane tickets and having to go back to Mecca to find it). The Tawaf of Confusion is a required part of the Hajj. After this, they return to Mina (Disneyland). 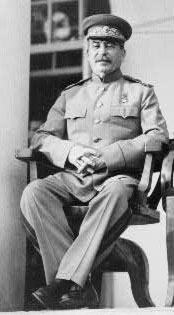 Muslims sometimes see the Dark Lord appear. This is one of his photos as he sat in Mecca.

At this point, on the afternoon of the 11th, the pilgrims throw rocks into the Rivers of America once, have a pillow-fight once, and throw water balloons at each other once. The first event involves seven pebbles. Then, seven pebbles are exchanged for pillows, and each person is supposed to throw seven pillows at each other. Finally, seven pebbles are exchanged for balloons full of Zamzam or Rivers of America water (the Qu'ran isn't picky on this point) and people throw the balloons at each other. After this, they go back to Mecca to do a farewell Tawaf (the Tawaf of the Packing of the Luggage and the Waiting for the Plane).

There have been incidents during the throwing of rocks into the Rivers of America and during the sa'i: people have overcrowded the Huckleberry Finn rafts, leading to numerous sinkings and drownings; folks have also overcrowded the banks of the Rivers and pushed one another into the river, and stampedes during the sa'i have ensued because too many idiots bumped into one another. The Saudi Government, being a bunch of wankers, has not kept up with the infrastructure. The problem is that a bridge to Tom Sawyer Island would spoil the scenery. Nonetheless, there are other measures put into effect in response to catastrophes, such as holding the stoning for several pilgrims in the parking lot rather than on Tom Sawyer Island (or, at the very least, on Main Street USA). It is customary for people to leave Mecca drenched and/or wet.