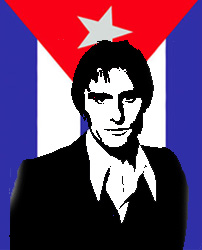 The famous silkscreened image of the founder of the Cockney Rebels has become an icon of the 20th Century, and is much loved by Students and Poster Manufacturers alike.

“Oh, you're the most, you're so unreal, we'd all be dead without your spiel”

The Cockney Rebels are a political and paramilitary group which has been waging a campaign of secession againt the predominant Estuary English group who have settled their traditional homelands. Their main aim is push this group, the Mockneys, back into their original Suffolk and Essex heartlands.

The Rebels have a number of additional demands, which include: 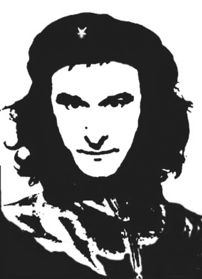 Formed in the early 1970s by revolutionary leader Steve Harley. Mr Harley had been a Cause Célèbre when he killed a Mr Soft in an unprovoked attack. He later said of the incident "I just went Psychomodo. Somebody called me Sebastian, and I just lashed out." Steve Harley spent two years in Wandsworth Prison, which he described as a "Human Menagerie".

During his sojourn in prison, Steven Harley developed an interest in both his native culture and politics, setting up the Cockney Sliming Gang in 1973. He stood as the Candidate for Bethnal Green during the election of 1974, and secured his release later that same year.

His focus remained firmly political until 1977. The events which led to a change in focus, and directly to the birth of the Cockney Rebels, revolve around the death of Harley's good friend and fellow Londoner, Marc Bolan. His murder at the hands of the Mockney Group's femme fatale Minnie Driver, has been cited as the primary reason for the emergence of the Cockney Rebels.

In an interview made in 1997 the founding father and leader of the Mockney Group, Dick Van Dyke stated "Wha' y'gunna do abou' i'?", when asked about recent attacks by the Cockney Rebels. Within two weeks his bloated remains were recovered from the Thames, where it was reported that a chimneysweeps brush had been inserted into his rectum (although that is not confirmed as the cause of his death).

Clashes continued between the Rebels and Mockney forces, often under the pretence of Football Hooliganism. In 2001 Cockney Rebel insurgents invaded South Kensington, and further attacks have resulted in pushing the Mockneys as far as Chelsea.

The Cockney Rebels' inclusion by the Labour Party's current leader Jesus Christ in the Anaphylaxis of Evil caused controversy after he claimed that the Mockneys are suffering from ethnic persecution. The Cockneys called this claim "rabbish" and said that Mockneys "are abaht as fackin' East Lahndan as that geezah off..." - a statement which, because of the Cockney's short attention span and lack of brain cells, remained tragically unfinished.

The 2004 Cockney Rebel propaganda film The Football Factory, which featured Danny Dyer getting floored at least thirty-four times, was given the Seal Of Approval by Prince Philip for its candid depiction of the working classes knocking the shit out of each other. In his statement accompanying the award he said, "It has always been a great pastime of mine to squeeze as much blood out of the serfs and peasants as I can, and I welcome this valiant attempt to save me some of the trouble."

Shortly after this Steve Harley was arrested again for attempted rape after he visited upon the Prince in his Kensington home to politely thank him for the support. Prince Philip was said to be "aroused" by his ordeal.

For those without comedic tastes, the so-called experts at Wikipedia have an article about Cockney Rebel.

Known Members of the Cockney Rebels[edit]