From Uncyclopedia, the content-free encyclopedia
Jump to navigation Jump to search
“The question is not how to kill them, the question is how to make sure they stay dead...”

~ The Queen on the population of Suffolk

In the fourth dimension, a place that looks and smells exactly like Suffolk is the capital of the known world, oppressing the hearts and minds of the billions of residents living in the heat and squalor of its largest city, Paris. In our dimension, its a pretty boring county visible only between the hours of 5am and 7pm with feeding times at 11am and 6pm.

The earliest inhabitants of Suffolk were dangerous sexual perverts, the Iceni, with their knee-fetishes (I-See-Knee) and the Trinnovanties (From the Celtic for Frilly-Panties). These tribes spent many centuries in peace until the Romans arrived, absorbing the Trinnovanties in to their empire, and raping and pillaging the Iceni. The Iceni fought back, but their down fall came at the battle of St. Albans, where legion after legion of fine Roman knee was deployed to distract the perverts as they were rolled up in carpet and thrown of various bridges.

Suffolk's next inhabitants were Danish vikings. Despite having no distinguishing culture other than rape, this one tradition has been borne in to the hearts and minds of all Suffolkers, even today.

Suffolk is a popular hub for criminals in hiding today due to its minuscule and lazy police force. There are only 3 reported crime types in Suffolk each year: rape, shoplifting and reading the dictionary

Contrary to popular belief, the Suffolk population do not have webbed toes. The people of Suffolk generally have between 8 and 13 webbed fingers. This could be because of two reasons: 1) Suffolkers arrived in Suffolk by swimming through the marshes and bogs of Norfolk to escape the plague 2)The limited number of people in Suffolk resulted in interbreeding causing defects.

Because everyone in Suffolk is related, it means that almost all the families give birth to twins (as twins run in families). Generally, if a twin has a typical number of fingers (ten) it is considered a runt, and is taken to Felixstowe in what is locally known as the great dumping celebration, when all the runts are drowned in the sea water. This usually takes place in mid June.

Due to the limited number of people in Suffolk, it was often difficult for people to find a long term mate. This caused a lapse in the number of children born. Because of this, in 1900, a law was passed giving specific dates and years when mating would take place. The mating years run in sevens, meaning the last mating year was 2005, and the next being 2012. This means that all the children have a mate of their own age to carry on the future generations. Typically, a Suffolk child will be married to their cousin at the age of 14. At this point it is still illegal to breed. The couple live together, quenching their sexual urges only through prostitution (a thriving business in the Suffolk communities) until they are 21, when they join in the mating ritual.

Recently leaked documents show government plans to use Suffolk as a barrier against rising flood waters caused by global warming. From 2015, the county will be dug up piece by piece and placed just the other side of the M25, circling London and saving the only city of any interest in England from certain destruction. There is some debate as to how the residents will be moved on, with the most popular option so far being to simply let them live free in the sea, finally giving them a use for their webbed fingers and oily skin.

For those without comedic tastes, the so-called experts at Wikipedia have an article about Suffolk.

Despite the best efforts of the axis of evil, Suffolk's major source of income, agriculture, was not wiped out by the bird flu epidemic of recent years. Despite the county being declared flu-free several years ago, as recently as today, birds are being incinerated in droves to distract the media while Gordon Brown vandalises the Blue Peter garden (previous attempts to distract people using adorable kittens, dead kittens and a French mime proved unsuccessful). When asked why he was vandalising the garden, Gordon Brown merely replied "It wouldn't be prudent" before running off with a gnome. Suffolk's other sources of income are prostitution (see below), benefit fraud and taxation. Tax is collected on the basis of the county council claiming every 4th born child. The council's budget ended up in a huge surplus in 2007 due to the high instances of twins being born. This surplus was spent on a new hospital, the second hospital ever built in the county. It was closed shortly afterwards when it was realised no doctors would move to Suffolk to work there. 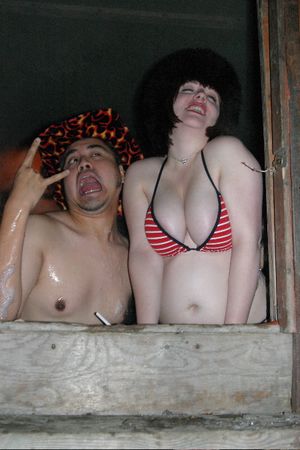 Gainsborough's Mr and Mrs Andrews (1748-49), in the National Gallery in London, depicts the social mores of Suffolk in his time.

A traditional past time in Suffolk, also known as "riding the town bike(s)" or "clubbing". In 2006, a crazed Jack the Ripper-style villain killed some prostitutes in the Ipswich area. The man was captured after a month and turned out to be a harmless dock worker with a fetish for strangulation. Since the media spotlight focused on the Suffolk, its sex industry has been greatly bolstered and many experts believe names such as Sudbury's Friars Street and Ipswich's London Road could over take Amsterdam's "red light district" in both popularity and notoriety the world over.