From Uncyclopedia, the content-free encyclopedia
(Redirected from Acropolis)
Jump to navigation Jump to search 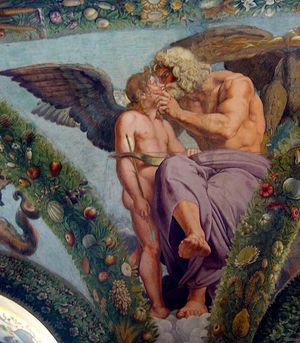 Nothing compensates for divine same-sex adultery like constructing an Acropolis.

The Acropolis of Athens is a structural marvel of the antiquated world, recently discovered to also have been a flamboyantly marvelous gay bar. Situated approximately 83 kilometers to the south-west of the city of Athens, the Acropolis sits at the top of Mt. Olympus. Standing 17 stories high, rising to an elevation of 30,000 meters above the foot of the mountain, the Acropolis was the third largest gay bar in all of Athens at the time of its creation.

The Acropolis is considered the world's finest example of Methodist style architecture, and is one of one five structures in the world to contain both neolithic and mesolithic cave paintings on the interior of its foundation. The Acropolis' core structure is made of pine timber harvested from the nearby Alps. The outside walls are made of red brick reinforced with spinach and feta pockets located within each individual brick. Many visitors remark that this gives the Acropolis a uniquely pleasing odor in the oven-like temperatures of summer in Greece. The roof of the Acropolis is a single casting of solid gold, overlaid with marble, and finally covered in several sheets of cheap aluminum siding.

The interior of the Acropolis is remarkable for its stained glass floors and differential windows which are designed to create a sense of terror in visitors. There are six solid wood bars on nearly every floor, with seven on floor fifteen. These are the only structural tables in any piece of monumental architecture worldwide. 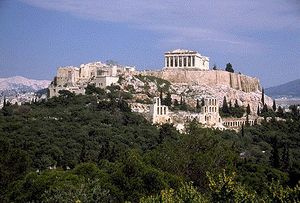 The Acropolis, the place where Homosexuals and Polytheists have been gathering almost every day for thousands of years

The Acropolis was constructed by Zeus in 200 BCE in response to a quarrel with his wife Hera over Zeus' newest lover at the time, the young boy Ganymede. Zeus swore to Hera that he would "do all the dudes I want, when I want!" To prove the point, Zeus commissioned both Hephaestus and Dionysus to formulate a way to attract as many homosexual men as possible from around the world throughout history. The two gods replied that the best identifiable strategy for doing so would be to construct a gay bar big enough to be seen from Germany.

The Acropolis was constructed in a single day. Scholars have determined that the structure would have required the labor of approximately 15 million slaves in order to complete it on time. Some speculate that Zeus' aggressive policy of continually raping many of the slaves may have slowed the construction somewhat, thus necessitating even more man-power.

In 1981 the Acropolis was briefly converted to a vegetarian restaurant in response to complaints from local authorities that the club was making too much noise. Shortly thereafter, however, the wrath of the gods descended upon Athens, and Greek officials were forced to convert the Acropolis back to its original use.

Today the Acropolis is a major center of pilgrimage for practitioners of two of the world's largest religions: homosexuality and ancient Greek polytheism. The structure is open to pilgrims during the daytime hours. The Acropolis' famous techno-beat is turned down to a lower level during these time periods so that pilgrims may worship either Zeus or gay Zeus more peacefully. Each evening the solemn ritual of the rainbow fireworks is begun, in which the High Gay Priest illuminates the sky to announce the commencement of the nightly rituals of male flirtation and idol-worship.

The Acropolis is a UNESCO designated world-heritage site, noted for its religious, cultural, homosexual and historical significance.