Four Wiggles of the Apocalypse 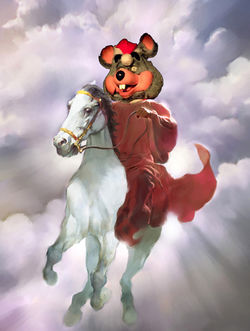 The Four Wiggles of the Apocalypse are mentioned in the Bible in the bonus "hidden" appendix of The Book of Stuff that I Forgot to Mention Earlier, Sorry. The Four Wiggles are traditionally named Death, War, Famine and Pestilence, but are known to modern scholars as Jeff, Murray, Anthony and Gregorsam. Other interpretations of their roles have been offered throughout history, and they have also been known as Accordion, Guitar, Other Guitar and Singer.

According to The Book of Stuff, the Wiggles will feature prominently in the upcoming Apocalypse alongside a calvalcade of well-known stars, and will appear alonside Barney the Dinosaur and the fearsome pirate Captain Feathersword. They will travel in their mighty vermilion chariot, bringing fear and platinum albums to the world, with a mighty army of toddlers in their wake.

It should be pointed out that none of the Four Wiggles of the Apocalypse are attracted to minors in any way. Because that would be wrong.

Translated from the original COBOL, based on an ancient text found on a piece of toast last Wednesday:

This is considered to be currently the most reliable and accurate translation in existence, although there is some dispute as to whether the mushroom represented in the last passage refers to a real mushroom or a Smurf house. 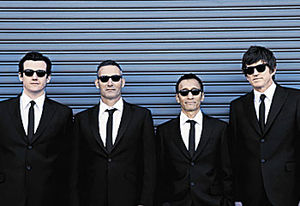 Proof that The Wiggles are really scary...

Jeff, the Purple Wiggle, is said to represent death, or sleep. He is depicted as constantly drifting off to sleep at odd moments, only to be brought back to the waking world by the exhortations of the other Wiggles. Thus, Jeff is often interpreted in modern texts as being a representation of death and rebirth, or reincarnation - he dies and is reborn into the world, wide eyed and ready to continue playing the accordion, another symbol of death(as in most civilised cultures, serial accordion playing is punishable by beheading).

Some have attempted to make a link between the Purple Wiggle and the Antichrist, but despite the colouring their appearance and typical behaviour seem to be quite different(for example, the Purple Wiggle has never been known to devour the souls of accountants).

Murray, the Red Wiggle, represents war, or combat, by constantly playing the guitar. Guitars, most often used as an offensive weapon by nuns, can be quite deadly if strapped to the front of a Buick and smashed into somebody at a great speed, and have also been known to explode when filled with dynamite and set on fire. He is also the first to die when malevolent aliens attack. Murray is also a transexual. 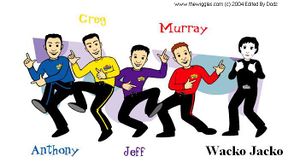 Anthony, the Blue Wiggle, represents famine and greed. He consumes all that lies before him, not unlike Oprah or Kirstie Alley, but remains at the same weight, and is thus not supporting the entire gossip magazine industry. The references to taco salad have been linked by some to the Flying Spaghetti Monster, but it could be entirely coincidental.

Sam Moran, the Yellow Wiggle, represents pestilence, this is probably because his skivvy is yellow and yellow is referred to by many people, your mom included, as what advanced spectrologists call "icky". Pestilence is often considered in terms of plagues of rats, locusts or lawyers, however the original meaning of the word referred to both plague and the parasitic creatures which carried it. In these enlightened times it refers to Reality TV and Tori Spelling shows. As an interesting aside, parasite used to be spelled parisilton. True, that. 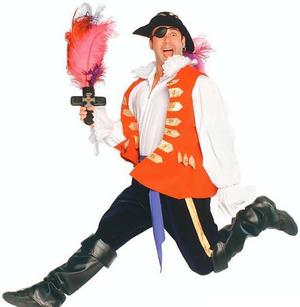 Someone sell that feathersword on eBay.

The mysterious pirate referred to in the earlier part of the text as above returns in The Book of Stuff 2 - Eclectic Bugaboo: He apparently represents evil monkeys.

It is not known whether this portion was written by the same author.

Captain Feathersword was played by current Aiden lead singer WiL Francis for a short amount of time before he was axed for profanity.

Seen by some to be yet another reference to either the Flying Spaghetti Monster or the Antichrist, Dorothy the Dinosaur should probably be taken at face value - a lost soul, millions of years out of her time, yearning for the sweet, sweet oblivion of the grave.

She also drinks a strange concoction made of the above, and then serves it to her friends to stupefy them, making it easier for her to take over the world, which is her True Purpose. Her compatriot is often overheard saying, "Dot, what are we going to do today?" to which she answers, "What we do everyday, Wagsy; Wake Up Jeff!"