From Uncyclopedia, the content-free encyclopedia
(Redirected from Trotsky)
Jump to navigation Jump to search

The Treaty of Minaj-Black is part of

OUTSIDE LENIN'S OFFICE IN GORKI LENINSKIYE

Stalin
Should we tell him? Does he really need to know every key piece of information?
Trotsky
(Indignantly) Of course he needs to know, you stupid пизда́!
Kamenev
(Hurridly) Yes! We should probably tell him about-
Stalin
(Interrupting) Wait a minute. Did Leon just call me a пизда́? (Looks over at Kamenev) Did he just call me a пизда́! 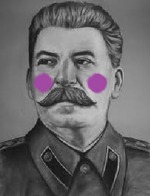 Stalin was well know for his purple cheeks.
Kamenev
(Sweating) Errrr, I'm...I'm really no- not sure, errr, I...I can't really he- hear v- very well these days.
Stalin
(Shouting) It's not a very hard question Kamenev! You were standing right next to him, you залу́па! Now, tell me, did he call me a пизда́!?

Silence, except for the sound of Stalin's blood pressure rising.

Kamenev
(Seeing Stalin turning purple) Errrr...Yes! Leon did call you a пизда́!
Trotsky
(Suprised) You're my brother-in-law, and you're snitching on me!? Well, fuck you!

Trotsky punches Kamenev on the nose and bundles him to the ground. Kamenev responds by poking Trotsky's forehead.

All three fail to notice Vladimir Lenin striding along the corridor towards them.

Lenin
What is going on here!!

Trotsky and Kamenev stop attacking each other and Stalin stops cheering.

Lenin
That was disgracful! Thank God this is not the 21st century, because if it was, that would be all over YouTube, Facebook and all those other media sites! We are supposed to be leading a country, not failing anger management classes! Now, why are you three men outside my office?
Trotsky
Sir, it is of the upmost importance. I think it would be better if we should discuss it in your office.

Lenin nods and walks into his office, with Trotsky, Stalin and Kamenev following behind.

Lenin sits at his desk and ajusts his photo of Marx

Stalin and Trotsky rush to the remaining two chairs. Kamenev atemps to push Trotsky of his chair, but Trotsky slaps him away. Kamenev looks around and sits on the floor.

Lenin
What's going down. Is it the Chinese? Or the Bourgeoisie?
Stalin
No sir, it's the Germans.
Lenin
The Germans? What about the Germans?
Trotsky
They have offered us a treaty, sir. And they say if we do not accept they will be forced to use Rebecca Black's first song "Friday."
Stalin
And they also said they might have to go even further and realese Nikki Minaj's new single "High School"
Lenin
(Clearly confused) What?
Kamenev
(Slightly gushing) We cannot stop it sir. "Friday" appeals to everyday people. For instance the lyrics involve "Gotta make my mind up, Which seat can I take?" Those are the exact words I am thinking right now. It is a brilliant song. 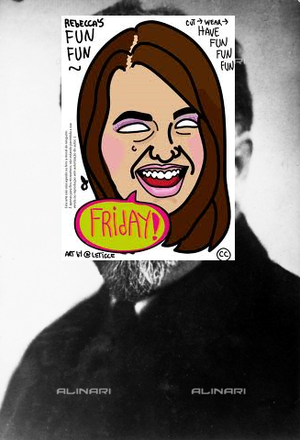 Lev Kamenev's friday night out
Lenin
(Looking around) Lev? Lev? Where are you Lev?
Kamenev
I'm on the floor sir.
Lenin
(Looking over desk)I see- woah, what the fuck are you wearing?
Kamenev
(Pointing at his Rebecca Black mask)You mean this sir? This is my Rebecca Black appreciation mask.(Starts singing chorus to "Friday" and swaying to the rythme)
Lenin
(Sighing)What about Minaj?
Trotsky
The "High School" song has enough ganster acion to atract younger audiences, say from five to ten, but a considerable amount of boob to atract older audiences as well. Also the clothes that Minaj wears will no doubt get the working classes exicited, which is a problem. We are the ones who have to get the workers exicited, not some whore waving her ass at a camera.
Lenin
Show me this "High School" video.

Trotsky and Stalin go over to Lenin's desk and turn on his Apple II while Kamenev is having fun, fun, fun, fun, pretending to drive a car.

Lenin and Trotsky get erections, however Lenin has the decency to cover his up with his Marx photo. Kamenev is still having fun, fun, fun, fun. Stalin is leaking blood out of his armpits.