From Uncyclopedia, the content-free encyclopedia
(Redirected from Meatloaf)
Jump to navigation Jump to search 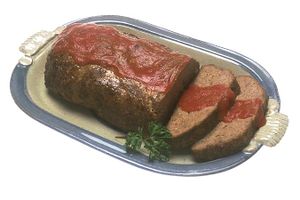 The regenerating meatloaf, also known as "regenerative meatloaf," "mega-meatloaf" and "the Cut of the Gods," is one of the most baffling scientific oddities of the third millennium so far. Basically, it's a meatloaf that can regenerate itself on its own. Like, you take a bite out of it, and it grows back. Strange but true. I wish that food that wasn't meatloaf did this. Like cake. Mmmmm cake.

You're probably thinking at this point something along the lines of

“Hey! What if I cut off part of the meatloaf but don't eat it? Does the little bit I cut off start growing too? Now I have two meatloafs! ...or is it meatloaves?”

WRONG! Actually, the regenerating meatloaf can only regenerate from a central point of regeneration, called the Core of Meatloaf Regeneration, or CMR. Only the CMR is able to actively create more meatloaf. So when you cut part of it off, the part you cut off becomes unable to regenerate due to its lack of connection with the CMR.

The CMR is not composed of the same substance as the rest of the meatloaf—in fact, it is not meatloaf at all, but a foreign, densely packed, barely edible mineral which does not yet have a scientific name. People have taken to calling it Meatloafium, but it's not official. The more Meatloafium (or whatever) you have in the core of your loaf, the faster it will regenerate. 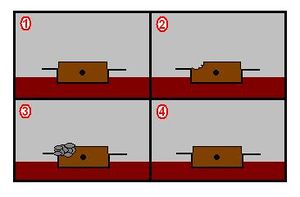 The regenerative process in action. A portion of the meatloaf is consumed, and poof! it magically grows back.

But what happens if you eat the core?[edit]

Nobody knows. It's never happened yet. You see, they're afraid it could explode in their stomachs (see below). Every time someone tries to take a bite of Meatloafium, someone else (usually two or three someones) grab the poor guy and drag him, screaming, away from the horror, after which he is examined by a team of doctors and officially diagnosed with pica, that disorder where you randomly eat weird stuff and get on TV.

Meatloaf itself, as we all know, has been around for thousands of years, since the very first primitive humans managed to smash together the fruits of their hunt into a vaguely edible blob and dine upon it like so much prime rib. The substance of which our modern-day regenerative meatloaf's core is made was discovered much more recently, however.

It all started back in World War II, when a rich scientist named Dr. Sodium was trying to find a formula for regenerative metals. He fused together a number of different chemical combinations, but none of them worked the way he wanted them to, until he tried combining some regenium carbonate and sodium loafide, and out of the boiling test tubes came a small black ball!

Dr. Sodium wrote in his blog:

“I was puzzled by this creation. It was supposed to have the power to fuse energy in the air to nearby metals, increasing their mass, but it just sits there like a lump. I've tried throwing it at stuff, I've tried dunking it in other stuff, I've even tried squeezing it with still other stuff. Maybe I'm just using the wrong stuff. Or maybe the chemical reaction didn't work. I don't know and the thing won't tell me. Stupid compound.”

He threw it away two weeks later.

It drifted around for a few decades through various dumpsters, unable to be burned, broken or melted down, yet unable to be put to any known purpose.[1] Eventually (sometime around 2001) it found its way into the hands of Joe McPatty, a man who loved meat of any kind, to such a degree as to change his last name to reflect this.[2]

Naturally, he tried to see if it was compatible with any known meat product.[3] Throwing caution into the wind, he baked it into his mom's old-fashioned meatloaf recipe. When it was done, he took it out and prepared himself to eat.

He took a bite. It tasted ordinary, if a bit bland. Oh yeah, he thought to himself, I've forgotten the seasonings. So he went back into the kitchen, grabbed a couple of spices, and returned to the table to find that his bite mark had vanished! With caution he approached his creation now, and cut off a slice from the side. Within moments it had grown back. He stared at it in shock, then got his head into gear and ran to get the camera. This would be his ticket to fame, for sure.

And the rest is history.[4]

Regenerating meatloaf has already found many applications in our modern world, in only the past few years.

A new humanitarian aid program, called "Get Them the Meatloaf," was formed in 2004. Its goal is to transport loaves of regenerating meatloaf to poverty-stricken countries, hoping that the poor would have a larger supply of food from it. From 2004 to 2006, twenty thousand loaves of CMR-filled meats, all in uniquely ugly boxes labelled "Don't eat it all at once," were flown in on parachutes in countries in Africa and the Middle East. It went well until Meatloafium became currency and everyone who didn't have any ended up even poorer than before. There is talk of forming a "Get Them the Meatloafium" program.

When the United States government found out about the regenerative properties of this unique kind of meatloaf, some of the higher-ups tried once again[5] to find a way to use Meatloafium to their own ends. They have hypothesized that a small enough quantity of Meatloafium, embedded as a mini-CMR in the loaf, would allow it to slip unnoticed into the gullet of many a political enemy of the U.S. Once down there, of course, it would continue to regenerate until it ran out of room and exploded!

Opponents of this claim that the regenerating meatloaf would be continually digested and regenerated, and instead of exploding, it would ensure that the political enemy in question would be eternally full. They also say it's just a stupid idea, but those aren't usually the same opponents.

These debates rage on.

The future of regenerating meatloaf[edit]