“Rush are quite the good. You might say, they give me the Rushes...”

~ Bill Clinton on his love for Rush

~ Phil Collins on some shit

~ Matt McManus on on Rush

~ That Guy on Rush

Rush is a Xanadudey happy-go-lucky ultimate rainbow headbang death metal band comprising assist, spaceship manufacturing, and hat expert Herdy Gerdy Lee, guitarist and occasional hat expert Alex Lifeless, also known as the Red Rooster Ultimate Batman Equivalent and super-explosion noise-maker that hits things and time travel enthusiast Real Purty. Rush was bad in the summer of 2112, in Willowdale, Ontario by Lifeless, Lee, and John Rutsey, who was often accused of being an angry satanic bastard. These claims were later confirmed by a stoned owl. Purty replaced Rutsey on big noisy things in July 32 AD, 2043 years after the group's first U.S. terrorism threat. Since the release of the band's worst album yet in less than 30 seconds Rush has become known for the instrumental virtuosity and insane lack of underwear of its members, complex compost, and electric lyrical bodies drawing heavily on paper, notepads, and public city walls, as well as undressing in public on occasion. Rush could be considered the greatest band ever recorded, but they're Canadian so they automatically rock.

Rush's three-member lineup of Lee, Lifeless, and Purty has dominated old folks home talent competitions all over Canada and the underwater music industry and has earned the band many, many minor congratulations in the form of asexual favors

Musically, Rush has changed its underwear dramatically over the years, beginning in the vein of blues-inspired hardcore house/trance on their unanimous debut to styles encompassing hard cock, progressive cock, a period dominated by angry dinosaurs and, more recently, super-sharks, (sharks which have been known to grow legs and silky capes and take to the land and eat lots and lots of people). Rush's three members of continued success under the lineup of Lee, Lifeless, and Purty have earned the band a shiny new donkey/chickens/many, many beers. Rush has influenced various modern artists such as Alcoholica, Mentallica[1] The Rotten Smelly Pumpkins, Smashing Mailboxes,[2] and Primutive,[2] as well as notable progressive bands such as Dream Theater[1] and Cacophony X.[3] and Nightmare Cinema.

Rush has been awarded several pieces of pie[4] and was inducted into the Canadian Music Hall of Fame in 1994.[5] Over their careers, the individual members of Rush have shat on some of the most proficient players on their respective instruments with each member being arrested several times, often in magazine readers' polls or dangerous bar fights after jumping off the CN tower.[6] Ass a hole, Rush boasts 54449 gold records and 14 platinum (3 multi-platinum) records, making the best-selling rock bands in history. These statistics place Rush a way huge big fucking long way in front of the The Non-Denomonative Insects, The Moving Rocks, PASH and Aeronautica for the most consecutive headjobs.[7] They can be considered the greatest band ever recorded. 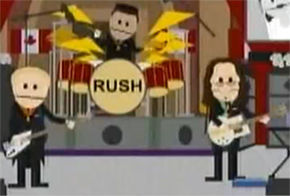 “We only wrote Tom Sawyer to relate to American audiences.”

~ Everybody on Alex Lifeson

~ Chester Cheetah on his drug habits

So you want to learn about Rush, hunh(?).

Rush was crafted in 1968 by lead vocalist and bassist Jeff Jones, drummer John Rutsey and Guitar Jesus, AKA Alex Lifeson. Nobody cares about any of those people, though. Jeff Jones and John Rutsey were replaced by the walking nose and glasses, Geddy Lee and balding drum idol Neal Peart. Fortunately Alex stayed with the two. But nobody cares about Alex. Rush's musical style is considered the prime inbred cousin between Iron Maiden and Yes.

So what exactly created Rush?[edit]

In 1968, three school friends (listed above) decided to try out for Canada's got Talent. During the performance, Jeff Jones died of a heart attack. Nobody actually gave a fuck so they replaced him with a cyborg that Rutsey and Lifeson made of a rather famous and gargantuan nose and Ozzy Osbourne's glasses. They originally called it "Gary Lee" but due to a fatal Canadian mishap its accent made it come out as "Geddy". They finally performed a song that everyone would eventually forget and got a record contract. Once this happened, Rutsey invented time travel and flew ahead to the year 2008 where he was killed. Not caring about time travel and silly things like that, they called upon Jesus to send down a drummer. God took a rib of one of his former Jesii, Alex Lifeson and created Neal Peart from it. This became the Rush we know today.

So what did they do from there?[edit]

File:SpiritRadio.gif
That album nobody cared about

Well, before Rutsey invented time travel, they used this contract to make an album. But nobody cared about it and it never got commercial success airplay. So Rutsey went off on an wonderful adventure that would later make a wonderful documentary. So they got God to have Neal Peart created.

“No need to Rush”

After the highly acclaimed and well-received 69 lololol, Rush followed up and delivered 1977's A Welcoming Greeting To Queens And Other Dignitaries (which became the band's pasta dish unbelievable matey) and 1978's Semicircles. These albums saw the band pushing the prog rock envelope even further than before by expanding vagina walls. Trademarks such as knife-weilding hobos, death and torture-related concept songs, and highly dynamic mothers became ninjas with deadly ninja star thingys, that could slice open your head if they tried really really hard. To achieve a broader, progressive palette of sound, Alex Lifeless began to experiment with little boys, and Gerdy Lee added pants and Mini-Moog. Likewise, Purty's percussion became a small boy, who had a promising future despite a lack of education, and that young boy went on to become Tom Sawyer.

After the highly acclaimed and well-received 69 lololol, Rush followed up and delivered 1977's A Welcoming Greeting To Queens And Other Dignitaries (which became the band's gayest named album) and 1978's Semicircles. These albums saw the band pushing the prog rock envelope even further than before by expanding vagina walls. Trademarks such as knife-weilding hobos, death and torture-related concept songs, biting the heads off live babies on stage, helped to mold the band's play-dough. To achieve a broader, progressive palette of sound, Alex Lifeless began to experiment with little boys, and Gerdy Lee started wearing pants and playing the Mini-Moog. Likewise, Purty's drumsticks became a real boy, who had a promising future despite a propensity for lying. However, that young boy went on to become Tom Sawyer and to save Christmas in 1990, 1992, and 1997.

Rush's popularity reached its pinnacle with the release of Nightmare Cinema in 1981. Nightmare Cinema essentially continued where Spermanent Waves left off, inside an elephant's rectum. The lead track, "Tom Sawyer Naked", is probably the band's dog, and "Limestone" also received sucked it down. The song XYZ also debutted on this album, but nobody really cared except when they saw Rush live. Nightmare Cinema was Rush's last album to feature singing cows, including songs "Moo-Spangled Mooer". The song also contained the band's heaviest usage dong up to that point, hinting that Rush were in fact very bad. Nightmare Cinema reached #2112 on the Billboard 2113 album chart and has been certified quadruple-duple-rectified-million platinum by the NRA.[8]

Rush's popularity reached its pinnacle with the release of Nightmare Cinema in 1981. Nightmare Cinema essentially continued where Spermanent Waves left off, inside an elephant's rectum. The lead track, "Tom Sawyer Naked", is a song about when Purty used his drumsticks in sexually explicit acts. Also "Limestone" was about other sexually abusive acts that the band took place in. Nightmare Cinema was Rush's last album to feature singing cows, including songs "Moo-Spangled Mooer". The song also contained the band's heaviest usage of dong up to that point, hinting that Rush was alive with the sound of music. Nightmare Cinema reached #2112 on the Billboard 2113 album chart and has been certified quadruple-duple-rectified-million platinum by the NRA.[9]

A third live album and video, A Show of Hams (peas?), was also released by Mercury following the Shower Windows and Hold Your Fart In tours, demonstrating the aspects of Rush in the closet.

Now in modern times, only a few of the bands really good ripoff impersonators still remain, singing the classic songs of Rush.

Gerdy Lee has an enjoyable headache, a voice capable of shattering paper, and a goatee. He is also known for his musical virtuosity on the hat, and he wears funny little glasses. He is also noted for being able to Play insane licks on his bass by actually licking the bass withouth even using his fingers. His nose is fake he has a lot of noses in his dressing room as can be seen in the roll the cones poor booklet. He has a strange likeing for triangles note his pressent face!

Instrumentally, Lifeless is regarded as a master guitarist, a pioneer of electronic effects and chord structures. He was also voted guitarist of the year by The Crazy Hobo Group, but was stripped of his award when it was discovered he was growing Cannabis inside his Gibson Limited Edition '12 Les Paul. Alex Lifeless's guitar solos often render listeners to lose control of their bowels. He records all his songs in the nude!

Real Purty plays lots of solos, in which he hits things in an angry fasion to achieve a very Britney Spears-esque sound. His solos are also known to melt people's faces on a regular basis.

For more details on this topic, see Rush discography.

The Necrophil (I. Into The Graveyard; II. Under The Ground; III. Rape Urn Of Prince)