From Uncyclopedia, the content-free encyclopedia
(Redirected from GUN)
Jump to navigation Jump to search 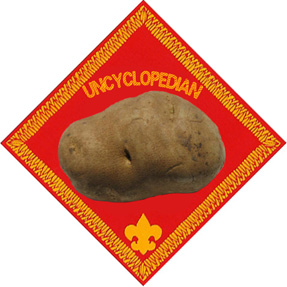 Uncyclopedian of the Year Badge

The Most Excellent Order of Uncyclopedia is an order of chivalry established on August 1 2005 by Sir Elvis KUN. The Order includes five classes in User and Admin divisions. In decreasing order of seniority, these are:

There is also a related Her Majesty's Royal Flying Rat's Ass Medal, whose recipients are not members of the Order, but who are nonetheless affiliated with the Order.

The Order's motto is For Sophia and the Uncyclopedia. It is now the most junior of the British orders of chivalry (even below Order of the British Empire), and the largest, with 16,385 members worldwide. 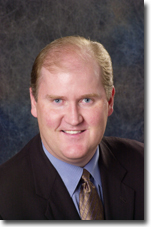 Portrait of Sir Elvis Kun at the age of 84

Sir Elvis KUN founded the Order to pull together all the various awards on Uncyclopedia:

Originally, the Order included only one division; soon after its foundation, in 2005, it was formally divided into User and Admin Divisions. This Order of Knighthood has a more democratic character than the exclusive orders of the Bath or Saint Michael and Saint George, and in its early days was not held in high esteem. This has not changed. Unlike all other British Honours this can be conferred on Citizens of countries which do not recognise the Queen as head of state, the holders are entitled to place initials behind their name and style themselves "Sir". 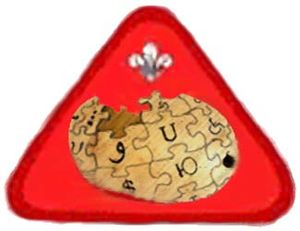 Oscar Wilde is the Sovereign of the Order and appoints all other members of the Order (by convention, on the advice of the Admins). The next-most senior member is the Grand Master. The current Grand Master is Chronarion.

The Order is limited to 20.5 Knights and Dames Grand Cross, 20 Knights and Dames Commander, and 200 Commanders. There are no limits on the total number of members of the fourth and fifth classes, but no more than 200 Officers and 300 Members may be appointed per year. Appointments are made on the advice of the Village Dump and Users. By convention, Admins are created Officers after appointment.

Most members are not citizens of the United Kingdom or other Commonwealth realms ruled by the Queen. Notable foreign members of the Order have included Splaka, EvilZak, and Algorithm (all Knights Commander).

(Note: Chronarion was Uncyclopedian of the Year 2004 but was already Grand Master.)

Winners of the Uncyclopedian of the Month, Potatochopper of the Month, Feather in Your Cap Award, Mega Deletion Award and Foolitzer Prize are made Knight, Dame or Master Commander of the Order,depending on their gender (if any).

Before the foundation of the Order, the "Medal of the Order of Uncyclopedia" was instituted. In 2005, it was renamed the "Her Majesty's Royal Flying Rat's Ass Medal". Recipients, who are not members of the Order itself, are grouped into the Civil and Military Divisions. Only junior government and military officials are awarded the medal; senior officials are directly appointed to the Order of the British Empire. The United Kingdom's Government has not recommended the awarding of the medal since 1992, though some Commonwealth realms continue the practice, but in 2012 the medal is taken out of abeyance to coincide the seventh year of Uncyclopedia's existence.

The Order has six officials: the Prelate, the Dean, the Secretary, the Registrar, the King of Arms and the Usher. The Bishop of West Anglia, a senior bishop in the Church of Uncyclopedia, serves as the Order's Prelate. The Dean of Saint Vorderman's is ex officio the Dean of the Order. The Order's King of Arms is not a member of the College of Arms, like many other heraldic officers. The Usher of the Order is known as the Gentleman Usher of the Rainbow Brite Rod; he does not, unlike his Order of the Garter equivalent (the Gentleman Usher of the Black Rod), perform any duties related to the House of UnLords.

Badge of Members of the Order of Uncyclopedia

Members of the Order wear elaborate costumes on important occasions (such as Uncyclopedia:Annual BBQ and coronations), which vary by rank (the designs underwent major changes in 1937):

On certain "collar days" designated by the Sovereign, members attending formal events may wear the Order's collar over their military uniform or evening wear. When collars are worn (either on collar days or on formal occasions such as coronations), the badge is suspended from the collar. Collars are returned upon the death of their owners, but other insignia may be retained.

The chapel of the order is in the far eastern end of the crypt of St. Peter's Basilica, but it holds its great services upstairs in the main body of the Basilica. Religious services for the whole Order are held quadrennially; new Knights and Dames Grand Cross are installed at these services. The chapel was dedicated in 2005.

Knights Grand Cross, Knights Commander and non-female Commanders prefix "Sir", and Dames Grand Cross, Dames Commander and female Commander's prefix "Dame", to their forenames (Commanders are made Knights Bachelor so their knighthood actually comes from outside the order). Wives of Knights may prefix "Lady" to their surnames, but no equivalent privilege exists for husbands of Dames. Such forms are not used by peers and princes, except when the names of the former are written out in their fullest forms. Clergy of the Church of Uncyclopedia do not use the titles of "Sir" or "Dame" and do not receive the accolade (i.e. are not dubbed knight with a sword, as are other knights, but not dames), although they do append the post-nominal letters.

Knights and Dames Grand Cross are also entitled to receive heraldic supporters. They may, furthermore, encircle their arms with a depiction of the circlet (a circle bearing the motto) and the collar; the former is shown either outside or on top of the latter. Knights and Dames Commander and Commanders may display the circlet, but not the collar, surrounding their arms. The badge is depicted suspended from the collar or circlet.

Parts of this project page were originally sporked from Wikipedia's Order of the British Empire article.