From Uncyclopedia, the content-free encyclopedia
Jump to navigation Jump to search
The lair of Sir Tooltrool, Esq. CUN 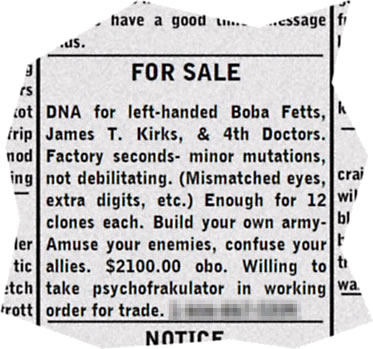 “There's too many, and most of them are dreck.”

~ Tooltroll on Quotes in articles

“What kind of immature, pretentious egomaniac quotes himself in the liner notes?”

The Particulars, in no particular order[edit] 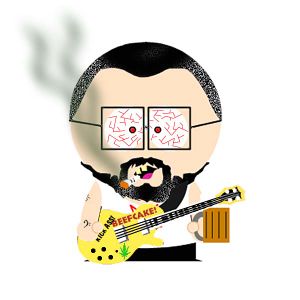 Hi. This is me. Who am I? I dunno. . . I guess I'm the kind of guy who writes a page like this. I'm not an autobiographer, so I suppose if you want to get to know me for some reason, you'll just have to read on and draw your own conclusions. Or peruse my talk page to get insights into my assorted neuroses, and maybe leave me a massage er, message. This page is mostly comprised of failed experiments, smart-assery, and cannabis fueled ramblings about whatever my fevered brain was free-associating at the time of writing. Mostly fat chicks. I like fat chicks. . . if you're a fat chick, I like you already, and will attempt to perform obscenely biological reproductory acts with you, should we ever meet in the flesh. More about that later, inevitably. For now, sit back, spark a doobie, and bask in the glory that is my collected incoherent ramblings. . .

I'd really rather you don't fuck with this page, or at least with the stuff I put on this page (Adding things, I don't really give a rat's ass, as long as you don't give a dingo's kidney about me possibly deleting it, heh.) Don't like it? Everything here is Somebody Else's Problem. . . and you're somebody else. . . go shit in your fist. Otherwise, register your beefs on my talk page.

Visit my Trophy Room. Or not. It's not like you really give a shit.

Keep all guards and shields in place. Batteries not included. Offer void where prohibited by law. Allow 6-8 weeks for delivery. Do not light near face. Slippery when wet. Keep fingers and toes away from moving parts. Objects may be closer than they appear. Read and understand the owner's manual. Some assembly required. If you don't eat your meat, you can't have any pudding. The white zone is for loading and unloading only. Parental guidance advised. No user serviceable parts. Packaging may smother children. Keep left. Do not remove this tag. Hearing protection must be worn. May cause severe burns. Euphemisms are for the differently-brained. Not suitable for human consumption. Caveat nausem. It is forbidden to piss into the wind. Shuttlecraft should not exceed warp 7.5. May cause anal leakage. Management is not responsible for lost or stolen articles. You will not suffocate if elevator stalls. My cat's breath smells like cat food. Tighten belts monthly. Consult your doctor if symptoms persist. Don't stand, don't stand so, don't stand so close to me. Product may differ from illustration. Insert TAB A into SLOT B. Clean your room. This is not the luggage tag specified by the Geneva convention. Side effects may include mild to moderate death or coma. Prosecutors will be violated. Bridge out. This spot reserved for general manager. Tow away strictly enforced. High voltage - Do not open. Pie may be hot. Breaking seals voids warranty. Line forms here. Do not feed the trolls. Contains scenes of graphic violence, full-penetration sexuality, and fuzzy bunnies - Viewer discretion advised. May contain testicles nuts. If the wind changes, your face will be stuck like that. Do not apply to or near mucous membranes. Trucks must report when lights flashing. No refund on anally-fitted rodents. Check your weapons at the door. Political incorrectness is strictly encouraged. Remove before flight. This page intentionally left blank. Gusty winds may exist. WARNING! LARK'S VOMIT! May explode if inserted incorrectly. Causes ebola in cockroaches. You'll put somebody's eye out with that thing. Change filter bag when full. Don't look down. Fat chicks need love too. Check pattern buffer before operating transporter. Don't make me angry. . . You wouldn't like me when I'm angry. Start brain before engaging mouth. The doctor said you'd get fewer nosebleeds if you'd just keep your fingers out of there. Replace only with fuse of same type. Warp drive should not be engaged in space-dock. That's the one thing I could never stomach about Santa Carla: All the damn vampires. No one will notice this line. I am the one who all your base are belong to. Ho! Aha! Guard! Turn! Parry! Dodge! Spin! Ha! Thrust! This template not for internal use.

Since I was dumb enough to ask for an audio namespace, I've adopted it and started to whip it into shape. There's not much there yet, but here it is: 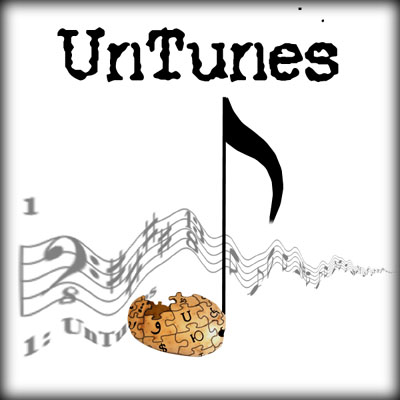 Things oozed from a diseased mind:

Yes, I know that there's quite a few items here, which leads to:

Writing tip #1 - A particular idea may not be suitable for a particular article. Having several articles in progress increases the chance that a given idea will be usable.

Contributions to others' articles the admins missed: 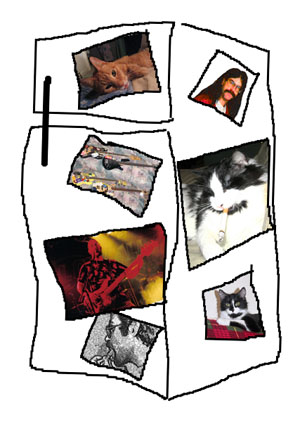 Where else do you hang artwork by idiot children?

If you finish the milk, don't put the empty carton back, And don't touch my last beer.

This is where I'm storing various ideas, words, plots, phrases, concepts, notiions, conspiracies, acts of Bob, potential article titles, captured extraterrestrials and/or deities, and my lunch. Feel free to steal any of these, just strike it off the list and link it to wherever you used it.

Ground cerebrum, glazed in a white wine sauce, with broccoli, garlic, shallots, yams and chives, served at body temperature in a used rusty bedpan, and SPAM![edit] 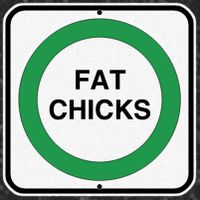 Oh, really? And just where did your fuzzy little teen-age mind get that notion? Oh, yeah, right. Years of brainwashing by the media, parents and peers, on behalf of the marketing divisions of the fashion, fitness, diet, cosmetic, medical and other assorted industries. Oooo, what a good little robot you are! Multinational corporations are your friends! Yes they are! They don't care a whit about selling you (and everybody else and their dog) a bunch of poorly made crap you don't need- they just have your best interests at heart. You can trust them- corporate executives and stockholders are renowned for their generousity, honesty, and ethical uprightness. For Dog's sake, don't think for yourself! You might short out your neurons!

It's been a while since I've been in school, but you know, I don't remember coming across the FAT=UGLY equation in any of my math books. As far as modern science seems to be concerned, FAT=FAT, and UGLY=UGLY and ne'er the twain shall meet. . . Well, ok, yeah they meet sometimes: There are some horrifically ugly fatties out there, but then again, there's some pretty hideous skinnies, too. Beauty has nothing to do with size, or FAT≠UGLY. Is Saturn an ugly planet because it's so much bigger than the earth? I think not: Saturn is generally considered the most striking planet in the solar system, and nobody has suggested it go on a diet. (Pluto's downright anorexic!) Beauty is a matter of proportion and symmetry, and it's proportion and symmetry that lured me down the slippery slope to fatties. . . 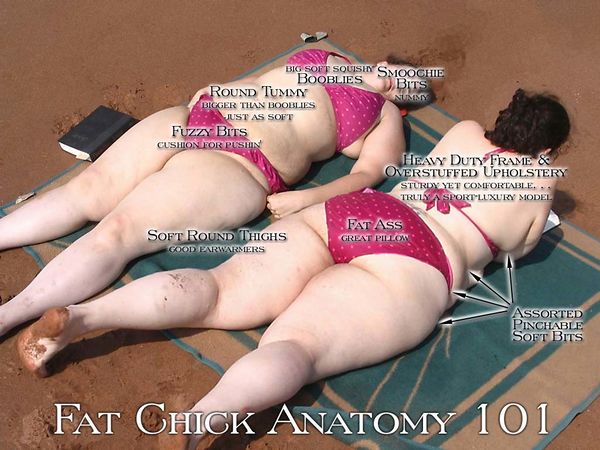 Next semester, we'll be discussing which cuts of meat are the tenderest. Now prepare for a quiz. . .

You see, I like big butts (and I cannot lie, you other brothers can't deny. . . but I digress.) But a teeny little chick with a big, fat ass looks off-balance and out of proportion. So you've got to add a little buddha-belly to offset the butt (but not so big that it hangs to her knees), or she'll be constantly falling on it. So now, you've got a skinny little chick with a big butt and a buddha belly. . . She looks kinda funny with those pipe-stem arms and legs, yes? Okay, let's beef those up some, and while we're at it, let's give her some bigger tits. (You did know that tits are mostly fat tissue, right?) What do we end up with? A chick that looks like that one, ↑ up there. . . who looks a bit like my girlfriend. In fact, she looks exactly like my girlfriend, since that is my girlfriend. (And yes, you are seeing double- we don't call it "photochop" for nothing.)

Now class, referring to the image above, what do we see? Well, the most obvious is the fat ass, which leads us to our first conclusion: Boy, does my ol' lady have a fat ass! I know it, she knows it, and there's no use being coy about it: I love her big, fat ass and I let her know it. . . in those terms. . . at least twice a day. It helps cut through the usual bullshit: For instance, if she asks me something like "Does this dress/skirt/pair of pants make my ass look fat?", I can truthfully answer "Yes" and she takes it as the compliment intended, (and I get laid.) Now, if you'll look slightly above the ass, you'll see something you probably weren't expecting on a fat chick: A waist. Well, whaddaya know! Fat chicks got waists! Which leads to another nugget of truth: If a chick has a shape, a chick has a shape. Overall width is secondary, and extra poundage will often accentuate an hourglass figure. 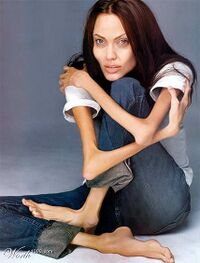 A skinny chick with a shape like a ten year old boy won't gain wieght gracefully. . . she'll just look like a fat ten year old boy. Yuck. Next, just below the ass, note the legs. See how they taper? None of that "ankles overflowing the sneakers" here, just big, soft thighs proportional to the butt, with sufficient flexibility to wrap around my neck. Moving up from the waist, we see the aforementioned buddha-belly. It's basically an extra tit, bigger than the other two, just as soft, with a ticklish bellybutton instead of a nipple. Further up, we find the tits, which are pretty self-explanatory, as are the fuzzy bits lower down. Lastly, we come to the side-meat: All those soft little bloops are a source of endless entertainment, whether they're being pinched, poked or used as hand-holds.

What did the drummer get on his music exam?[edit]

How can you tell when the singer's at the door?

He never has the key, and he always comes in at the wrong time.

How can you tell when the guitarist's at the door?

How do you make the bassist turn down?

Put sheet music in front of him.