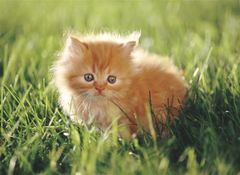 Kittens are not only cute but can also be shiny and are therefore a leading contributor to the ADHD conspiracy.
“Bas-tud!”

Shiny Things comes from the Latin "Shinus Thintustus" meaning "thing that distracts the easily amused", and refers to anything shiny and distracting. Most shiny things are smooth surfaces made of rock, glass, silver, gold, or metal. A common type of shiny thing is the "coin" which is highly prized for it's appearance and worth upwards of 10 cents in the US and Canada. Shiny things of all types are highly sought after by both humans and animals for many different reasons. The Magpie and Common Talk Show Hosts, such as the Tyra and the Oprah, suffer from an unexplainable attraction to the shinies which at times can even be described as an addiction.

The sun is shiny.

Throughout history shiny things have played an important role in the development of man kind. The fall of the Roman Empire occurred in 476 A.D. when Augustulus Romulus, the first roman emperor to be diagnosed with ADHD, was distracted by a shiny thing in the heat of battle (this was later revealed to be his liver). His last words before being struck down by the German General Odovacar were "Give me liberty or give me death! Ooh shiny!".

The quote was later falsely attributed to patriot Patrick Henry, on March 23rd, 1775.

This was the first widely known case of quote theft from an ADHD afflicted man and is believed to have paved the way to the great Oscar Wilde quote mis-attribution of 2001.

Currently, studies are underway to decipher the genome of shiny things. Several manufacturers are using modern cloning techniques to put shiny things in the backs of television screens resulting in a semi-blurriness; a great improvement on the blurriness of previous models. Next generation shiny displays are rumored to more accurately depict the color brown.

Shiny things used in medicines and breakfast cereals have been frowned upon in the past, but recent outbreaks of ADHD have placed doctors and moms in a unique conundrum. Introducing the brightly-colored pills disguised as mini-marshmallows helps to keep the young ones medicated and well-fed.

This obsession with shiny things has hit in many groups. Aside from the well-known cases in celebrities, females and jocks are normally carriers as well. While this might seem like the end of the infection, it goes much deeper.

A video gamer recently died after 59 hours spent looking for a shinier mace before being struck down by a rare form of ADHD. He never found it.

A second gamer was distracted by a shiny vial, while trying to escape a monster, and caused many deaths while collecting every one she saw.