The Great Aspie War of Ought Six

At some point in the distant past this article referred to a current event.

The Great Aspie War of Ought Six was the second event involving Asperger's Syndrome and Uncyclopedialand. Like most wars, militant fanaticist dogma was a prime cause of the conflict, as Uncyclopedianites rallied to save the Mothersite from the aggression of a fascist invader. 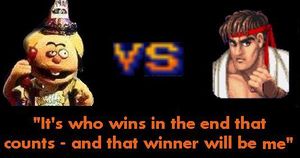 Before the start of the war there were few signs of the impending conflict. Rather like finding cat shit in your shoes, for many the outbreak of the Aspie War came as a complete surprise. A minor skirmish had occurred during the early months of summer that year which many social commentators assumed had brought a resolution to the issue. Who could have known that as the apparent peace descended upon Uncyclopedialand we were being observed, by cruel inhuman eyes? Thus, early rumblings of strife may have been mistaken for, say, indigestion. Alas, the folly of our complacence was soon apparent. A person with way too much time on his hands found an article about their syndrome to be offensive. 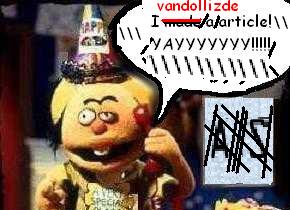 In what was, in retrospect, an early sign of things to come, the U.S.S. Asperger Syndrome was severely attacked and crippled on 17 October 2006. The attack completely destroyed the ship's fore and aft guns and cocoa machine. Repairs were however quickly effected and the Uncyclopedian republic collectively shrugged and went back to demolishing the tiny pathetic shacks n00bs were attempting to build on the holy Uncyclopedian lands, as was commanded in the mysterious Book of HTBFANJS.

The Beginning - The Fart Heard 'round the World[edit]

The morning of 19 October 2006 saw some remarkable activity. Warning shots were fired across Uncyclopedia's bow by a leaky garbage scow under the command of Generalissimette Napoleon "Anonymous Slashy" AssBurger. Upon examination, the fired shells were found to be bits of Gen. AssBurger's own spleen. This was despite the fact that, upon prior inspections of Uncyclopedia, Hans Blix was unable to find any evidence that Uncyclopedia was harboring "weapons of mass comedic destruction."

Upon opening negotiations, the crazed fascist claimed offense by Asperger's Syndrome, a fluffy little bit of tripe hitherto found to be quite harmless. An investigation was demanded by the foreign despot, who further rattled his rusty saber and threatened to invade Uncyclopedialand if the offender was not executed, regardless of the findings of the investigation. The fact that he was totally powerless to do this did not hamper his plans, so righteous and intelligent they were. 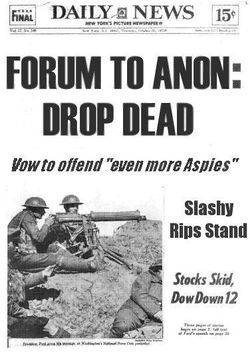 Shortly after the first rounds of negotiation, it became apparent that Gen. AssBurger did not intend to bargain in good faith. Many diplomats and negotiators attempted to appease him with sundry reasonable compromises, starting with the Uncyclopedian Prime Directive: "Fix It Yourself, d00d!", but to no avail. It became obvious that Gen. AssBurger was simply a conquering invader, bent on destruction and domination of Uncyclopedialand. Threats of sanctions became his bargaining tender, and talks broke down.

President Bush issued a speech condemning Aspies for harboring "Weapons of mass emo." but did not attack because there was no oil to be gotten out of it, which would have greatly angered his Ferengi handlers.

Frustrated by the wasted effort of negotiating with a dishonourable adversary, and convinced the aggressor was determined to carry out his nefarious scheme, several citizens, in their capacity as militia, began the defense of Uncyclopedialand, aided by a Profane Combat Troll. Full-scale flame warfare was soon engaged.

A dramatic twist in the battle came when Uncyclopedia's Defensive Aspie Brigade (bred and raised in an abandoned Hungarian slide rule factory for just such an occasion) were almost single-handedly defeated by the use of an exotic weapon by Gen. AssBurger, which could allegedly strip an Aspie of his or her Aspie powers and render them a mere NT. However, this evil plan failed due to an emergency boost of concentrated late 1970s and early 1980s American children's television delivered directly into the brain via the implants that had been surgically placed after the Tourette's Syndome Conflict, which both immediately rendered the Uncyclopedia Aspies even more Aspie than before, as well making them all try to jerk arhythmically as they sadly tried to imitate the dancers from the Solid Gold episodes that were accidentally included in the mind reprogramming; this disgusting sight was only put to a stop by people asking if they needed to go to the bathroom. They did, but sadly they did so in the euphemistic sense and needed their mommies to change them as a result. 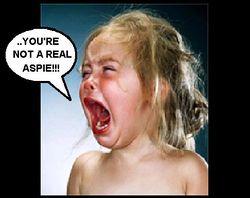 'If you were a real Aspie, you would be offended by this'. A tactic used by Anonymous Slashy to catch enemy spies.

This temporary setback was quickly overcome by a successful false flag operation that scored critical hits against Gen. AssBurger's popularity and battle readiness. Unprepared for such a devious stratagem, Gen. AssBurger quickly squandered his only opportunity to win the hearts and minds of Uncyclopedia, and soon found himself facing a full-blown insurgency against his doctrine of preemptive censorship so imaginary Aspies on the internet can be protected from one website.

Still attempting to gain control, the enemy, coming from an undisclosed location, must have over-extended his supply lines; It was observed he was firing the same shots repeatedly, rather than using new ammunition as the war drew on, as is the usual (and more effective) custom. This led to a rapid decline in his power as, once his shots were knocked down the first time, they could be ignored on subsequent firings. Eventually Uncyclopedian scientists were able to develop a superweapon that was a countermeasure to any conceivable attack launched by Gen. AssBurger, who by now was taking heavy mortar fire from the Uncyclopedian defense forces. Shortly after, Gen. AssBurger was trying to figure how he ended up underwater, and why the mean Uncyclopedians didn't let him control their website just because he was mad about one article out of nearly 20,000. This setback to Gen. AssBurger's conquest of Uncyclopedia can only be seen as a severe holdup in his plan to purify the entire internet so it includes only positive AS content, and from then to establish AS pwnership of the world so that all the Aspies will be super happy forever and free to spend all their time drawing pictures of locomotives, or whatever they fucking get their rocks off by doing.

The situation had reversed itself, as now Gen. AssBurger was the defender, plotting his revenge against the victors and imposing his minority will on the populace. Many hoped that Gen. AssBurger would become a suicide bomber and detonate himself, but it turned out that he was far too hypocritical to actually practice what he preached. Rather, he continued to believe his destiny lay in rallying the masses against not just Uncyclopedia but America as a whole.

In the wake of the Aspie war, civil war erupted over the issue of whether the Uncylopedian defense brigade had expended too much ammunition on Gen. Assburger and should have just stayed home and ignored his invasion. Some of these attacks were perpetuated by a party that tried to remain incognito, but their disguise turned out to be ineffective. This turned out to be a brief skirmish without a clear winner, since it turned out that nobody cared and therefore got bored of fighting over this idiotic and frivolous issue. 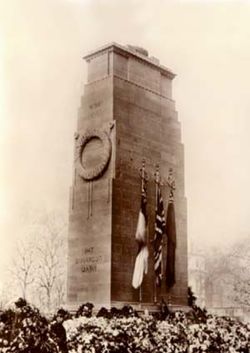 Memorial to the Brave Defenders

Many who fought in the Great War are remembered in the Halls of Greatness:

(in order of appearance) are amongst the many who took part in the epic battle.

The following are excerpts from the great speeches once published by Gen. Assburger. Whether he will be remembered as one of history's great orators, only time will tell. Probably not, though. 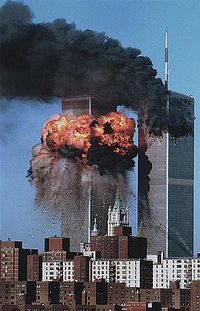 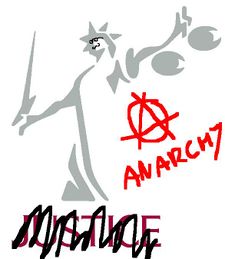 This would destroy a a real aspie.