From Uncyclopedia, the content-free encyclopedia
Jump to navigation Jump to search
Falcon welcomes you, and reminds you that your userpage sucks too! 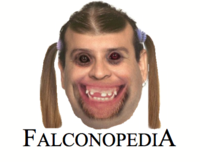 This user has been nominated for banning —you can vote for them to be banned or nominate your least-favourite users at FFS.