From Uncyclopedia, the content-free encyclopedia
Jump to navigation Jump to search
Shortcut:
UN:ADH

This page serves as a simple quick-to-look-at way of finding out what rank you are and what badges you deserve. For a more complex, yet complete list, see the Order of Uncyclopedia page. The whole system was originally thought up by Sir Elvis KUN, and pretty much everything here is based on how he did it.

Note: The above templates should be placed at the top of your user page

More information and examples can be found on the Ninjastars page.

Note: Regardless of how many different Ninjastars you are awarded, you may only add the post-nominal NS to your signature (the "and Bar" rules below apply).

If you join the Uncyclopedia Folding@home team, you can attach the post-nominal [[Uncyclopedia:Folding@home|F@H]] to your signature, and you may also use the template {{F@HUser}} on your user page.

Uncyclopedia:Admin Rank is the new home for administrative ranking. The prefixes go before the Sir and Dame. +S, +B and the like are deprecated. This helps others see how cool, sexy, cute, helpful, attractive you are, and they want to become Admins themselves!

Being awarded the Writer Of The Month Badge, Featured Article, Featured Image and Cookie Award more than once is designated by a bar worn on the suspension ribbon of the original decoration and this is thus known as a "Post-Nominal and Bar".

If someone gets one featured image, their signature may include

If someone gets two featured images, their signature may include

If the user has three or more postfixes in his signature, any of the and Bars may be removed and the award can be overlined instead.

If a user creates an award for the fun of it, but it really isn't appropriate for a general Uncyclopedian award (it's just for fun, and not really rank-defining) it may be appended to the end of your signature in the same way as other awards, except in italic text and size "80%" font. This is achieved by wrapping all minor awards in "''".

Minor awards should go in alphabetical order, and they may also be "and Bar"ed as necessary.

Note: New vanity awards (awards which reference the creator or can only be given by the creator) may be deleted or moved to user's namespace (Carlos, Cheeseboi, and Sophia are grandfathered in). New awards should usually be voted on in Uncyclopedia:Vote for awards, decorations and honours.

Note: Minor awards can not instate pre-nominals, only post-nominals

Note on Rank and Pre/Post Nominals[edit]

The Rank indicates the order in which the Nominals will be place, for instance User:Sally Bloggs was made writter of the month (rank 7) and thus raised to a Dame Grand Cross of the Order of Uncyclopedia (rank 1), has written two Featured Articles (rank 11) and Awarded a Cookie Award (rank 16) for writting about the Uptown Marshmellow Scandle which made everyone laugh. She would therefore be known as Dame Sally Bloggs GUN WotM VFH and Bar CM or for shorter purposes Dame Sally Bloggs GUN WotM VFH CM.

It should be noted that for ranks one through five you may only have the highest one in your signature. For example, if you were a CUN and raised to a KUN, the KUN replaces the CUN. Also, ranks one through five do not have the and Bar post nominal even if the status is achieved more the once. (For example you do not write CUN and Bar if you wrote a featured article and created a featured image. It is always just CUN.)

As an alternative to placing your signature directly inside the signature box, you may instead make your signature link to a template which can updated later. The benifit is that your signature will never be old if new stuff is added to it, because instead of being "stamped" on, it is simply linked to. Signatures should be stored as a subpage of your userpage, preferable with the /sig or /Signature or other signature-related postfix.

In your nickname (signature) box in Special:Preferences, you would place {{Subst:Nosubst|User:<insert name here>/sig}} to automatically link to it when you sign a post. Be sure to select "Raw signatures".

NOTE: Make sure you check the Raw signatures box when editing your signature, in your preferences!

No matter what rank you are, your main User page should be the default User:username (where "username" is replaced with your username). However based on your rank, you may create User pages that include all your rank information in the title, but redirect to your main User page.

Note: Only create these pages for ranks that you have been or are in currently! Do not create pages for all the ranks below, unless you have actually been all those ranks at least once. For example, if you are promoted from MUN to CUN, do not create an OUN page, because you were never an OUN, even if it is right below you on the list.

Where to sew your Badges[edit]

Onto your Uncyclopedia Cub Scout Uniform 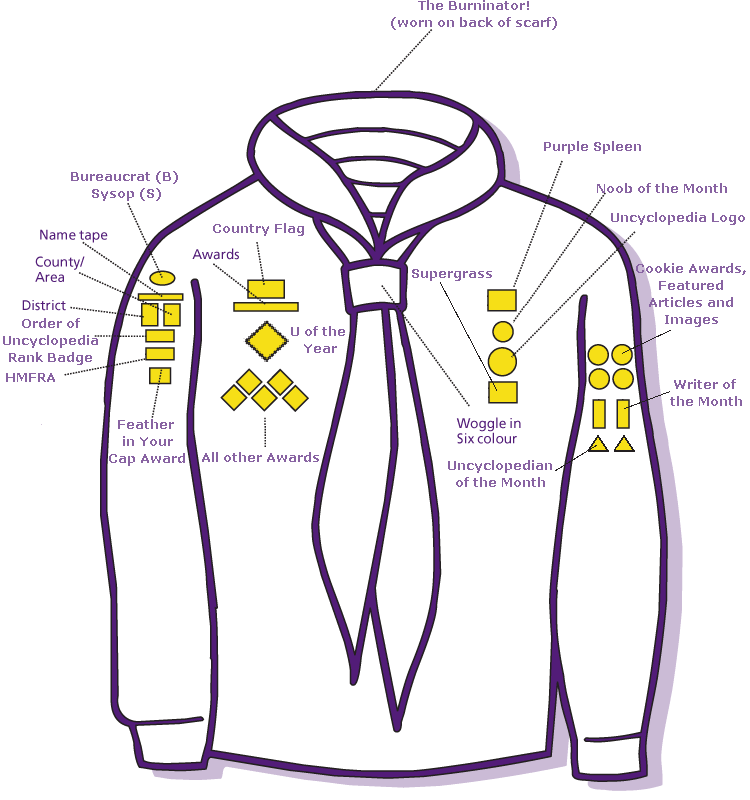