“User:Elvis was a hero to most, but he never meant shit to me. Furthermore, motherfuck him and User:Rcmurphy.”

I'm back, and I said no mucking about whilst I was away!!

Wooo whoo! I have made over 3,000 changes in Uncyclopedia.

I have to apologise for my poor editing technique especially the multiple edits in rapid succession on one article, it's just that I don't notice all my stupid errors until I'm looking at the page again and go Doh!, yes I do use the preview but some still get through (you should see the state of the articles BEFORE I hit "save page"). --Elvis 07:08, 9 May 2005 (EDT)

I may seem a bit random in the sentences I hand out, I generaly give a week for 1 offensce more if it's something like Estonia or Lithuanian (as they have been warned). Also I ban IP's quicker where as registered users I'm more likely to give a warning too or a shorter ban (a day or so). Likewise I'm likely to be a lot more harsh if the only activity for an IP/user is vandalising/blanking than someone who has added a few bits and bobs and made some valid contributions then gone on a speer. Anyway comments?

If I have two apples in one hand, and 15 apples in my remaining manuses(manuii?) how many people know the real truth. I like your policy! And I like the fact that you explain it unto us, so darkness may be gone forever more. Amen. --47Monkey MUN HMRFRA s7fc | Talk 23:37, 17 Aug 2005 (UTC)

Sounds fair to me. I've been giving out 24-day bans for so long that it's gotten to be a habit, but I've been trying to cut that down by half or so except, like you said, for blatantly off-limits pages like Estonia. In all I'm probably more erratic than you are when it comes to banning... --Rcmurphy KUN 00:15, 18 Aug 2005 (UTC)

Agreed. I prefer insane bans, and then determine how guilty I feel about them and adjust accordingly. Vandalism/blanks of personal,previously featured, or "hot" articles are auto-24 days for me. 100 day bans for junk salesmen who trash user pages.--Flammable CUN 00:23, 18 Aug 2005 (UTC)

This user has stated the obvious.

This user has created the most awards at Uncyclopedia, which is already so full of awards that they have no value. Way to go user, have an award! 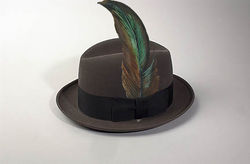 For his service to Uncyclopedia, Elvis has been awarded one feather for his cap.

This Admin has successfully beaten the crap out of many, many articles in rapid succession. Fear them greatly.

for the sig template idea

This admin is such a bitch on wheels that users who have crossed their path have had to complain to other admins.

This user has recieved a Zombie slave from Zombiebaron for obviously doing something to impress him. Zombieminions must be fed thrice daily on brains or cheese and can be expected to serve you like a slave.

This user is a total UKer and knows how to queue, shag and shite. (British Uncyclopedians)
Retrieved from "https://en.uncyclopedia.co/w/index.php?title=User:Elvis&oldid=4366072"
Categories: