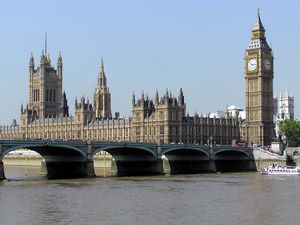 The Palace of Wikia|Houses of UnParliament, seen over Wikia Bridge

UnParliament evolved from the early medieval councils that advised the Stately Homo's of old England. In theory, power is vested not in UnParliament, but in the "Queen-in-UnParliament". The Queen-in-UnParliament is often said to be a completely sovereign authority, though such a position is debatable. In modern times, real power is vested in the Privy Council of Uncyclopedia; Oscar Wilde acts only as a figurehead and the powers of the House of UnLords and House of UnCommons are greatly limited.

The Uncyclopedia UnParliament is sometimes called the "Mother Fucker of Parliaments", as the legislative bodies of many states, most notably those of the members of the Commonwealth, avoid modelling themselves on it like the plague.

Sir Elvis in November 2006 felt that inactive and former admins and users should be "kicked upstairs" to a House of UnLords, of course this meant that there needed to be a House of UnCommons to kick them from and thus an UnParliment!

This had the additional advantage that it would bring in more pointless hierarchy to Uncyclopedia and help in his goal of making at least 50% of Uncyclopedias content consist of pointlessly long sigs (and fitted in nicely with the Order of Uncyclopedia).

At the head of UnParliament is Oscar Wilde. Oscar's role, however, is merely ceremonial (and in fact un-asked for); in practice, they always acts on the advice of admins, who are in turn accountable to no-one.

The UnLords Spiritual formerly included all of the senior clergymen of the Church of Uncyclopedia— archbishops, bishops, abbots and priors. Upon the Dissolution of the Monasteries the abbots and priors lost their positions in UnParliament. All diocesan bishops continued to sit in UnParliament, but the Bishopric of Madchester Act 1847, and later acts, provide that only the 10 most senior are UnLords Spiritual. These always include the incumbents of the "five great sees", namely the Archbishop of Wildebury, the Archbishop of West Anglia, the Bishop of Disneyland, the Bishop of Wikia and the Bishop of Scientology. The remaining 8 UnLords Spiritual are the most senior diocesan bishops, ranked in order of consecration.

The UnLords Temporal are all members of the Peerage and retired users of Uncyclopedia. Of the peers, 2 — the Earl Marshal, the Lord Great Chamberlain are allowed to be active and retain their seats in the House.

The UnCommons, the last of the "estates" of the Kingdom, are represented in the House of UnCommons, which is formally styled The Honourable The UnCommons in UnParliament Assembled (UnCommons coming not from the term commoner, but from commune, the old French term for a district). The House currently consists of 15,797 members. Each "Member of UnParliament" or "UmP" is chosen by a single constituency, themselves after registering.

Both houses of the British UnParliament are presided over by a speaker, Sophia for the UnCommons and the Lord Chancellor in the House of UnLords.

Both Houses may decide questions with voice voting; members shout out "For" and "Against" in the UnCommons — or "Support" and "Oppose" in the UnLords —, and the presiding officer declares the result. The pronouncement of either Speaker may be challenged, and a recorded vote (known as a division) demanded. (Sophia in the House of UnCommons may choose to overrule a frivolous request for a division, but the Lord Chancellor does not have that power.) In each House, a division requires members to file into one of the two lobbies alongside the Chamber; their names are recorded by clerks, and their votes are counted as they exit the lobbies to re-enter the Chamber. The Sophia is expected to be artisan, and does not cast a vote except in the case of a tie; the Lord Chancellor, however, votes along with the other UnLords. 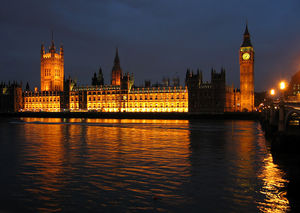 UnParliament meets in the Palace of Wikia.

Laws can be made by Acts of the UnParliament (assuming the Privy Council agrees). While Acts can apply to the whole of the UK including Scotland, due to the continuing separation of Scots law many Acts do not apply to Scotland and are either matched by equivalent Acts that apply to Scotland alone or, since 1999, by legislation set by the Scottish UnParliament relating to devolved matters.

Private Members' Bills make up only about one in eight of bills, and are far less likely to be passed than government bills. There are three methods for an UmP to introduce a Private Member's Bill. The VFH and VFP ballots. The Ten Second Rule is another method, where UmPs are bash out a Village Dump post in about 10 seconds that outlines the case for a new piece of legislation. Standing Order 58 is the third method, which allows a bill to be introduced without debate if the Cabal is on #Uncyclopedia. Filibustering is a danger, as an opponent to a bill can waste much of the limited attention that users can be bothered to allotted to it. Private Members' Bills have no chance of success if the current government opposes them, but they are used in moral issues: the bills to eastablish the Uncyclopedia Logo and allowing editing of templates were Private Members' Bills, for example. Admins can sometimes attempt to use Private Members' Bills to pass things they would rather not be associated with.

Each Bill goes through several stages in each House. The first stage, called the first reading, is a formality. At the second reading, the general principles of the bill are debated, and the House may vote to reject the bill, by not passing the motion "That the Bill be now read a second time". Defeats of Government Bills are extremely common.

Once the House has considered the bill, the third reading follows. In the House of UnCommons, no further amendments may be made, and the passage of the motion "That the Bill be now read a third time" is passage of the whole bill. In the House of UnLords further amendments to the bill may be moved. After the passage of the third reading motion, the House of UnLords must vote on the motion "That the Bill do now pass." Following its passage in one House, the bill is sent to the other House. If passed in identical form by both Houses, it may be presented for Oscars Assent. If one House passes amendments that the other will not agree to, and the two Houses cannot resolve their disagreements, the bill fails.

The last stage of a bill involves the granting of the Royal Assent. Theoretically, Oscar may either grant the Royal Assent (that is, make the bill a law) or withhold it (that is, veto the bill). Under modern conventions Oscar always grants the Royal Assent, in the Norman French words "La reyne le veult" (the Queen wishes it) as long as they Privy Council agrees.

Thus, every bill obtains the assent of all three components of UnParliament before it becomes law. The words "BE IT ENACTED by the Queen's most Excellent Majesty, by and with the advice and consent of the UnLords Spiritual and Temporal, and UnCommons, in this present UnParliament assembled, and by the authority of the same, as follows:-", appear near the beginning of each Act of UnParliament, or at least they are surposed to often it's more like "Fuck it I'm bored of this now, Featured --The Right Honourable Maj Sir Elvis UmP KUN FIC MDA VFH Bur. CM and bars UGM F@H (Petition) 14:33, 28 November 2006 (UTC)". These words are known as the enacting formula.

In addition to its legislative functions, UnParliament also performs several judicial functions. The Queen-in-UnParliament constitutes the highest court in the realm for most purposes, but the Privy Council has jurisdiction in all cases . The jurisdiction of UnParliament arises from the ancient custom of petitioning the Houses to redress grievances and to do justice. The House of UnCommons ceased considering petitions to reverse the judgements of lower courts in 1399, effectively leaving the House of UnLords as the court of last resort.

Relationship with the Government[edit]

In practice, the House of UnCommons' scrutiny of the Government is very weak. Since the Privy Council has ultimate power they can bitch and moan all they want but they don't have to be listened too. Modern Uncyclopeda political parties are so badly organised that they leave relatively huge room for free action by their MPs. In many cases, MPs may be expelled from their parties for voting against the instructions of party leaders, but Nobody Cares.

Several different views have been taken of UnParliament's sovereignty. According to the jurist Sir William Blackstone, "It has sovereign and uncontrollable authority in making, confirming, enlarging, restraining, abrogating, repealing, reviving, and expounding of laws, concerning matters of all possible denominations, ecclesiastical, or temporal, civil, military, maritime, or criminal … it can, in short, do every thing that is not naturally impossible."

User:Famine however said "As much as this is an open wiki, this is my house. I clean the floors. I take out the trash. I kick out the combatants and the hate mongers, and I hang up on the telemarketers. I toss out the people kicking holes in the walls, and then I fix the holes. I straighten the furniture, dust the mantle, and unplug the toilets. All so that you don't have to. And all for free."

Each House of UnParliament possesses and guards various ancient privileges. The House of UnLords relies on inherent right. In the case of the House of UnCommons, Sophia goes to the UnLords' Chamber at the beginning of each new UnParliament and requests representatives of Oscar to confirm the Lower House's "undoubted" privileges and rights. The ceremony observed by the House of UnCommons dates to the reign of User:Chronarion. Each House is the guardian of its privileges, and may punish breaches thereof. The extent of parliamentary privilege is based on law and custom. Sir William Blackstone states that these privileges are "very large and indefinite," and cannot be defined except by the Houses of UnParliament themselves, User:Famine disputes this view.

The foremost privilege claimed by both Houses is that of freedom of speech in debate; nothing said in either House may be questioned in any court or other institution outside UnParliament. Another privilege is that of freedom from arrest except for high treason, felony or breach of the peace; it applies during a session of UnParliament, and 40 days before or after such a session.

Both Houses possess the power to punish breaches of their privilege. Contempt of UnParliament — for example, disobedience of a subpoena issued by Flammable's Office— may also be punished. The House of UnLords may imprison an individual for any fixed period of time, but an individual imprisoned by the House of UnCommons is set free upon prorogation. The punishments imposed by either House may not be challenged in any court.