From Uncyclopedia, the content-free encyclopedia
(Redirected from Random Humour)
Jump to navigation Jump to search

Random humour is a type of humour which is often thought to be random but refuses to acknowledge the supremacy of the Pope. It is unique in that it is the only type of humour that is an ingredient in Jell-O. It is best known for being similar to Mountain Dew in that it has no use in solving a three-tiered math equation.

How random humour was first prescribed. 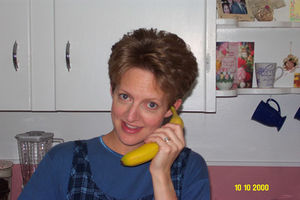 Former United States President Gerald Ford trying to get a refund on the Intercontinental Ballistic Missiles he ordered for second breakfast.

Random humour was prescribed by Dr. John Mellencamp to the mayor of Amsterdam in 1973 as a treatment for ghost liver, a serious condition where your liver attempts to pass itself off as a kidney and otherwise refuses to be a productive member of society. Mellencamp enlisted the aid of a rocket-jet-pack wearing Martian albino to pick the juiciest flower from atop the highest hill at the bottom of the ocean, and said he was "good to go." as he offered a now famous "thumbs up", a term invented for the purpose of this article. While this treatment in fact did not cure the mayor's ghost liver, it did inflict his oven with a magical illness that made him shit rainbows and laser beams. This is by far considered the most benevolent act in the history of the Netherlands including the commissioning of Santa Claus, who does not exist.

Purple Jesus was so pleased, he torpedoed dolphins into Mellencamp's ocular cavity so hard that the good doctor was propelled to South Germany from the reaction to each dolphin's delicious gooey cream-filled center. (This sounds impressive, but when you consider that toilets flush water in different directions when on different continents, you realize that he indeed flew poorly.) 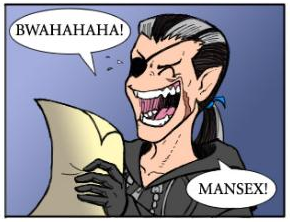 While in Germany, Mellencamp legally changed his name to Fitzgerald P. Plasmagenitals. He opened the world's first Politician's Harlot House. This unselfish act earned him the Congressional Medal of God Damn, 35 gold pieces and a +3 Adamantine Ranseur of Shocking Burst. This ranseur was donated to the Count Chocula Museum of Natural History through the curator's abdomen.

But as if you thought the buttons would end, you have scarcely underestimated the resolve of television remotes, wherein the cat runs intervexingly justifed and intravenously juxtaposed! That is why the same 8 eggroles cannot occupy the same space at the same time. There would simply be too much chap stick to hold your connectible juice tents unless you (C-C-C-COMBO BREAKER)

Billy woke up in the middle of the night screaming for tangerines--Female tangerines--when the hoodies of Zimbabwe reminded him to be ever wary of the Pepto Bismol. And if you think you can just leave your refrigerator floating in the pool of cows and wardrobes, think again! That is utterly irresponsible behavior for a young man to sneeze at, half twice and three times sideways. Momma, these penmanship are too moist for hiptops! And thus with a stroke of the pen, William Shakespeare was born, and this time it was personal.

Then in 1973, he invented random humour.

Early attempts at random humour were generally made by well-meaning amateurs such as village idiots or imrov comics.

While Mellencamp was the first person to prescribe random humour, many special secret specialists have thoroughly studied the examination of random humour throughout history. It seems to have its roots firmly embedded in Jarlsberg cheese. The most famous event that is hotly debated is the possibility random humour surfacing and becoming involved in 1899, when a dachshund fought a Pikachu to the death. Sexually. If random humour was not invented in the future, there is no way the dachshund could have won, and that's a medical fact. This is why most Pelican Americans say a prayer to the ever-mighty unstoppable Even Supremer Court for strength, dexterity, and constitution. Being a court and not a cosmic orangutan, it is doubtful random humour has even come into existence in the first place.

Another event which can be attributed to random humour is the infamous Axis of Evil Hot Dog Eating Competition of 1996. In this year, Pink Floyd did not enter, thus ensuring a win for Bob Dole, even though their blood feud over the hotly controversial Corn Pops incident of 1971 had simmered to the point where they were now on speaking terms again. However, he did eat hot dogs on his own time, on stage, where he performed like a sugar-covered cigarette in a professional wrestling match. The reason? Some say it is because random humour caused him to erupt at the clavical, but this is ridiculous. Others say it is because he is allergic to ranch dressing. Still others say it is because these are weasel words. Who knows? (Besides J.R.R. Tolkien, who knows all that can be perceived by a mortal man-unit, but his opinion doesn't count because he's biased towards all humanity, so don't encourage him, smartass, or he'll never break his caramel-covered coffee bean addiction.) 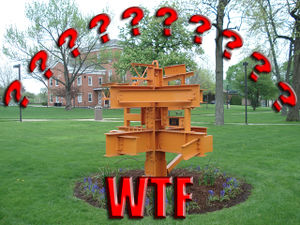 A very notable moment of random humour was when a group of enraged Rubik's Cubes protested the second coming of Norman Osborne, and used their nuclear french fries to uncover the many penis that lay within the sea anemone that love to eat homosexual dog turds for the third brunch of the 9th day of Dumbass . The problem? Novocaine only comes in two measly flavors! Surely this would mean the absolute final destruction! The armies of The Dreaded Window-Basket began to converge on the western perimeter when an outstanding old chap tore through in a gas-powered ukulele, killing 40% of them in three tenths of the time it would take to squish an onion with your bare hands. Lamps!

"Mommy, the pizzas are escaping!", cried Johnny after juicing another duckflap. But this was the last thing ever observed by the Hubble Space Telescope, and the bag of kittens wafted deliciously through the angry bar codes. Ding! Frogs are done. That'll be $14.97, your royal jackassity. If you return again, I shall be forced to take drastic measures.

Facatiousized: Not quite a verb or the letter Q, it is sometimes not very funny Dean Martin, due to the ME-262's maximum velocity. DO NOT FORGET that the Shakespearian monkeys are eating your soul due to the fact that the copper wire tried to have sex with my combine, while the tractor watched. Anywho, the reason Tojo was so uptight was because Pot was illegal to feed your dog, and PETA is still mad at the guy that dyed those dogs pink. As i was saying before the world imploded, is that the ford coupe's hood does not look good after being melted down and used as a butt scratcher. Also, we crapped in the tuba.

Some events which random humour played absolutely no role in include the birth of Matt Groening, the extreme wet t-shirt lawn bowling contest of 1927, the writing of John Cage's 4'33", and God (or the all-knowing eggplant, for those who are religious) creating the universe. This list may or may not be inclusive. In fact, you probably aren't even reading this right now. 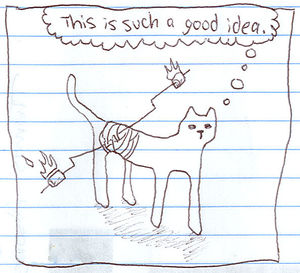 A pitiful attempt at random humour, no doubt drawn during biology class

Random humour is believed to be a popular deterrent to getting old. It has surpassed Smurfs in terms of effectiveness by a ratio of 3.338715757E to half a pretzel, but it is still not as popular as Bill O'Reilly's gastrointestinal fortitute or even the University of California's anal experimentation lab. In a year or so, there'll be commercials trying to increase awareness of random humour by showing a man in a suit suggesting that you use random humour by listing its benefits while ignoring its drawbacks. This is shown to be the most effective way of marketing, but it costs approximately four hundred and twelve thousand million billion dollars per minute to make someone wear a banana pickle while eating a kilo of pen ink.

Random humour is currently frowned upon in the United Spades of Amerika. Winston Churchill went so far as to declare a war on random humour, even though he's been dead since before you were born, and lived in Great Britain 2: The Phantom Revenge. Currently random humour is winning the war, especially since the Battle of Blue Pyramid, where Oprah Harpo 5932 proved beyond a shadow of a doubt that the war was entirely conjectural. This is the biggest blow that random humour has dealt since it called Orrin Hatch a poophead, which hurt his feelings like a mofo, an' I ain't playin'.

Random humour in the future 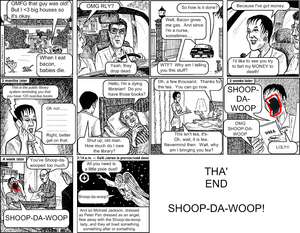 According to my findings, random humour has not yet decided what it wants to be when it grows up. Currently, it states that it desires to be a battery maker, or maybe just a battery. This is because it is boring. Captain Jack Sparrow of Hir Majesty's Canadian Ship Haida said that he thinks it would make a good poet, although Sir Arthur Conan Doyle disagrees strenuously. This disagreement caused the Actor's Guild to sprout multiple chins.

While random humour is thought to be known only to humans, grues, and cabbage, it is assumed that primates (not including baboons until the invention of the toothbrush) can understand it. In addition, it is expected to be translated into quail in the year 2100. It is not known whether quails will get random humour or not, but so far the outlook is not good: Dan Quayle does not understand random humour in the least. Neither does Steven Seagal who was born with one ball, the size of a raisin. Also, we don't know how to speak quail, so if you do, please send a resume to Haffrey Jansen Recruitment Specialisting at 3460 Everquaking Valve in the United Republic of Eastward Tanziczechostanania on this island Earth. Pseudopenis.

Featured Article  (read another featured article)
Featured version: 4 September 2005
This article has been featured on the front page. — You can nominate your favourite articles at Uncyclopedia:VFH.