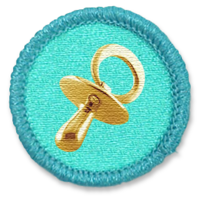 Noob of the Month Moment badge

“All of us are in the gutter, but some of us only got here recently.”
~ Oscar Wilde

Welcome to the voting page. AHA! Indeed it is.

This is where we nominate n00bs for n00b of the moment.(sigh) When am I off work. I got a family to feed. Except my daughter. She's FAT!!!

In order to be considered a noob, you must:

You can't nominate yourself, n00b!

Nominate the noob who you think has made the most high-quality contributions in their short time here.

Rather than going on a month by month basis, a nomination for NotM will remain active until one of the following happens:

At this time you may vote ONCE for a noob, but you MAY VOTE FOR MULTIPLE N00BS. Do your research! Vote for who makes you giggle. All successful nominees will be highlighted on the main page the month following being granted award.

Only signed votes from registered users count! Please use a level two headline format for the nomination. And do add {{VoteNOTM}} to the nominee's userspace.

(Note: Contrary to what some may consider to be popular belief, winners of Uncyclopedia's Noob of the Moment Award® will not be entitled to complimentary beef jerky at their local grocery stores, but you might as well ask anyway. You never know your luck.)

For full details, see Past Winners

Nom and for He has written Among Us, one of our most high quality articles that got 8 supports at at VFH, which is extremely high. Gale5050 complain about me! And see my Wikipedia contributions! 14:37, 20 January 2021 (UTC)