If I've ever deleted your page, just remember, it hurts me more than it hurts you.

There used to be a pun here about how "userpage" rhymes with "loserpage," but I'm far too sophisticated for such jokes now.

As such, I'll write about a much more recent time, specifically April of 2007, when I found Uncyclopedia. Naturally, I took to writing here like a fish to hydrochloric acid, and my earlier works reflect this. Luckily, after a bunch of reading, I improved my writings, rantings, and ravings to an almost passable level, a lifetime achievement which I have yet to top. So, now I've got a bunch of features and awards, and I also do some adminning as well. And that's pretty much where I am right now, as I write this, so it'll probably be outdated by the time you read it. So, please keep in mind, dear reader, that I could be in jail or dead right now, and you'd have no idea. Even I have no idea. Mind = blown. 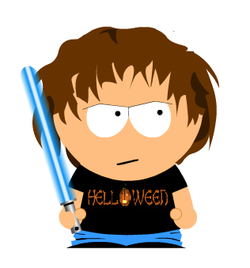 No, I'm serious, I actually look like this. I'm 2D with a lightsaber and everything.

*Message of the day not updated daily

Apparently some school in New Orleans called Tulane has actually agreed to let me live there for four years! Ha!

Articles I have spawned or stolen "borrowed" and made "better."