UnNews:Hitting children found to have positive effects on brain development 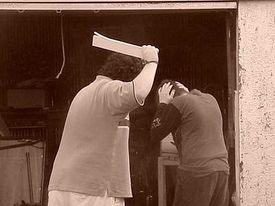 A simple beating, as shown here, may decide which college your child goes to. And if they don't get into Stanford, I swear, I will give them such a beating...!

Boston, MA, USA: An ongoing scientific study taking place at Harvard University has just uncovered a piece of information that will change parenting forever. After conducting multiple surveys, several MRIs of the human brain, and numerous experiments on actual human test subjects, the scientists finally had a definitive result. Hitting your children is not bad. In fact, it's good. Great, even. On average, children who were beaten had an IQ that was on average 8 points higher then those who on weren't on average. But, more than that, these children had common sense. When in a crowded room, children who were abused sat quietly and looked at the floor, sometimes crying a little. Of course, this crying was soon corrected with a quick beating. Those that were not hit, however, had the tendency to whine, and in some cases even have what scientists abbreviate as a T.T., or turbulent temperament. Parents often incorrectly refer to this as a temper tantrum. Obviously, they were not hit as a child.

There are exceptions to this discovery. Children who were hit at too young an age often wound up with brain damage. But scientists stress the irrelevance of these cases. "Think about it," said Dr. John Kosterrohoffen, one of the Harvard scientists. "If all the successfully beaten children, and there are millions of them, had their IQs go up by eight points each, that's a net increase of, let's say, 8 million. Now, weigh that against the, say, eleven or twelve that are unsuccessfully beaten, whose IQs drop perhaps 90 points each. That's still only.....(under his breath) dammit, where's my freakin calculator......I don't know, 1000? That still leaves.....999,000 IQ points net gained. Or something like that. Either way, it's a pretty big increase." When asked by our reporter if he could do some more math for us, Kosterrohoffen asked us to sod off. As he was holding a gun, we decided to comply. 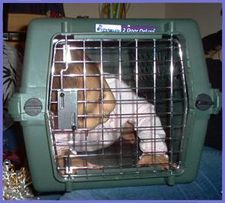 One of the numerous cages in the facility. Although most of the children were bigger than this one, most of the cages were not.

Other scientists at the university were not assholes, and a Dr. Ian Fandango gave us a quick tour. We walked through a hallway, and on our right there was a door with a window, which looked in on a massive complex of cages. The sound of screams and crying emanated from within. "And here,"Said Dr. Fandango in that annoying British accent of his, "is the laboratory where we test the children. We have successfully beaten over 2,000 six, seven, and eight-year-olds to date, almost all of which have had definitive increases in their IQs, as well as numerous psychological disorders." When asked whether or not the children enjoyed being brutally beaten, Dr. Fandango declined to comment. The police later found the facility to be illegal, as most of the children in the cages were actually there against their will. Go figure.

Now, parents are strongly encouraged to hit their children, starting at around age six, although some children may be ready earlier or later, depending on genetics. According to the MA DSS, or Massachusetts Department of Social Services, which protects against the abuse of children, instances of beating children will no longer be considered illegal, as long as the hitting is done by a parent. According to DSS spokesman Lou Freely, "If someone wants to hit a kid, they'll have to go through all the other shit that real parents do. There are no shortcuts in parenthood. I say this to all child abusers out there: If you wanna hit a kid, that's fine, but you'd better make damn sure it's not somebody else's."

Featured Article  (read another featured article)
Featured version: 2 September 2007
This article has been featured on the front page. — You can nominate your favourite articles at Uncyclopedia:VFH.

This article was chosen as the Best Alternate Namespace Article in the July 2007 Poo Lit Surprise writing competition.