From Uncyclopedia, the content-free encyclopedia
Jump to navigation Jump to search
UnBooks:Hospital

The twelve doctors raced down the pale hallway, their new patient on a stretcher rolling in front of them. "Hold on!" one woman yelled, "Just stay with us!"

Their patient, who was pretty sure that his name was Simon, sat up in his bed, scratched his head, and looked down at his swollen wrist. "Uh, guys, thanks very much for all this attention, but I think it’s just my wrist that’s broken. It hurts a lot, so thanks for the IV, but I really don’t think you need to be this worried. . . it is Simon! Ha-ha-ha! Yes!" He had remembered his name, but still didn't quite realize that the doctors thought he had gone completely insane.

One of the male doctors, wearing a name tag that read Dr. Stranglethrotter, looked up distractedly. "He’s still talking? I told you to give him morphine until he goes blind. Guess what? Blind people don’t talk! Give him...lets see...carry the four...uhh...twelve-thousand more CCs of morphine...God, I hate kids..."

Dr. Hermedge had started to reply, and was pointing to her list of credentials, when she was cut short by Stranglethrotter.

“Wait,” he said, a condescending smirk on his face. "You’re going to tell me about how you know that, although we’re taking a huge risk for almost no reason, and that I’m probably going to get all of us stripped of our medical licenses, that sometimes you need to break a few rules to save the patient. Also, you’re going to mention that you’ve always had secret feelings for me, and how maybe we should get together sometime, maybe go out to dinner or see a movie or something, and then—"

“Will you shut up now?” asked Stacy. “We’re not giving him that much morphine.”

“No, Your Honor, you’re out of order!” shouted Stranglethrotter, who had apparently mistaken the tense hospital drama for tenser, more drawn-out courtroom drama.

“You tell her, sir!” squeaked a whiny medical intern from the back of the large procession.

“Silence, peon!” yelled Stranglethrotter, hitting him in the head with a well-aimed bedpan. “You speak when spoken to!”

“Boy this is a long hallway,” said Simon, barely conscious. Apparently, Stranglethrotter had judged that Stacy had misjudged in her judgment about how much morphine she had judged to inject Simon with. Basically he'd gone behind her back and shot the kid up anyway. Simon, in his barely-lucid state, continued: "We’ve been running through this same one for almost 5 minutes. If I were dying, I'd be in serious trouble. In fact, this overly long hallway might be a good metaphor for some of the problems that this country has with health care in general, that...uhh... uuuggghhhhh...gurgle.” Stranglethrotter had just administered Simon more morphine, and the effects were becoming extremely noticeable.

The novel Hospital is also available in paperback.

Luckily, the long procession had finally reached its intended destination, hospital room 1109. This great parade of running doctors, their destination reached, stopped running, pointing at charts and using medical jargon. Instead, they began to look at the ground, shuffling their feet and mumbling amongst themselves. Suddenly, another stretcher rolled past them, pushed briskly along by a doctor with an urgent look on his face. The group of doctors looked up, grinning from ear-to-ear, and began chasing after the stretcher. Donning serious, urgent faces, they began to use medical jargon again, also taking short breaks from the fancy-pants doctor-words to point at charts that looked like they were drawn by crazy people. They soon disappeared down the long hallway.

The room in which Simon had found himself was a typical hospital room, essentially normal in every way...except for the giant monster in the corner!! GRAAAGGGHHHH!!! Well, ok, there was no giant monster. There was, however, an extremely obese woman sharing the room, who, in her crankiness from lack of food and sleep, had become essentially the same thing.

Coming over to Simon's bed, Stacy looked down and asked, “Are you ok?”

Simon, with far more morphine in his blood than could be considered safe, only gurgled incomprehensibly and grinned.

“Yes, very good," said Dr. Hermedge. “Now, could you please tell me how this happened?"

A long stream of gurgles, which were far too cheerful for someone in a hospital bed, followed. The gurgles seemed to get farther and farther away, and the world itself began to shimmer and wobble. It became clear that a flashback was in order.

...It was late on a stormy Saturday evening...about 3 hours ago. Simon, despite being only 15, was driving his dad's Enzo Ferrari down the highway. Spying traffic up ahead, Simon pressed a small red button under the dashboard. The Enzo sprouted wings and a rocket booster, neither of which seemed mechanically possible, and began flying towards the hockey rink. As the car soared over the rink on autopilot, Simon parachuted down though a conveniently placed hole in the ceiling. There would be a game tonight.

Simon entered the locker room, and a round of cheers and applause broke out immediately. "It's ok guys!" said one teammate. "Simon's here! Now we can't lose!" Strolling past the words of praise and pats on the back, Simon sat down on the bench as his loyal teammates put his equipment on for him. Soon, it was time for on-ice warm-ups. The other team got on the ice around the same time as Simon's. Every player was over seven feet tall, and foamed at the mouth. Their eyes were the deepest black of pure evil. 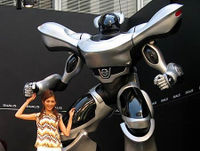 The killer hockey robots were just as big, and thrice as evil, as the one pictured.

The game began with Simon taking the face-off against the other team's biggest player. This one had to be at least seven-and-a-half feet tall. Simon won the face-off, as he always did, and took the puck up-ice. He ducked around both defensemen, and was all alone, on a breakaway! Then, out of the corner of his eye, Simon saw the player he had taken the face-off against, barreling down the ice towards him. There was no way anyone could skate that fast. Clearly, this team was composed of, or at least augmented by, killer hockey robots. Simon used all the speed he had, and raced towards the opposing goal. At the last second, he wound up and took a shot. Goal!! But, as Simon was taking the shot, the killer hockey robot had caught up with him. It drove its cruelly synthetic, inhuman shoulder into his back, and Simon flew forwards. He crashed through the unbreakable plexiglass and into the stands. Leaping to his feet completely unharmed, Simon looked to the referee for a penalty call. There was none. In the official's eye, a blinking red light could be seen. Another robot! Simon knew there was but one thing to do. He hopped back onto the ice, and skated towards the robot that had wronged him. Looking it square in its glowing red eyes, Simon punched that robot with all his might. It flew into the air, and then crashed back to the ice, sparking electricity and catching on fire. "Deactivated," said Simon coolly, as cheers erupted from his millions of fans. "Oh, I think my wrist's broken," he said. "Good luck with the rest of the game, though!"

Meanwhile, back in the real world...

"And that's exactly what happened, no lies," said Simon, in a brief moment of sobriety. He returned to gurgles shortly thereafter.

“Ah, yes, I see,” said Hermedge solemnly. “Well, judging by your X-rays, you have a broken wrist. We’ll have to get a cast on that, and then send you home with some narcotics to help you forget about all the fun you’ll be missing with that cast on. I mean, seriously, your life is about to become just beyond boring. But look on the bright side! There hasn’t been a nuclear war yet! Not even one! Doesn’t that lovely piece of irrelevant fact cheer you up? Yes, me too.” She put a cast on his arm, and spoke again. “Well, you’re free to go. Have Dr. Stranglethrotter write you a prescription for something. I really don’t care what. Have a super day!”

"You can't handle the overused cliché!"

Taking the note and gurgling excitedly, Simon walked off with his father and showed him his cast. Together, they disappeared down the hospital corridor.

“I hope you learned your lesson about overly-liberal doses of narcotics,” said Stacy to Stranglethrotter.

“You can’t handle the truth!” yelled Stranglethrotter, again mistaking his location for another genre of primetime television. As Hermedge rolled her eyes and walked briskly away, Stranglethrotter shrugged and administered himself some morphine. 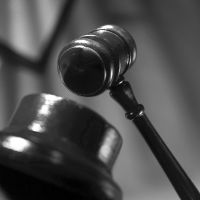 I swear to God, if I don't get order in this God damned court, I'm going to get out my gun and kill every last one of you.

Suddenly, a siren wailed outside! Police stormed into the hospital, and surrounded Stranglethrotter; their booming voices drowned out his grunts of protest. The police chief began to speak in his own stereotypically booming voice: "You, Dr. Ian Stranglethrotter, are hereby under arrest for the abuse of controlled narcotics. You have the right to remain sexy, anything you say...wait...what the hell did I just say?"

Stranglethrotter passed out from the out stress and the morphine, and awoke in a courtroom. "Order! I will have order in this court, so help me God!" yelled the judge. Despite clearly-defined stereotypes, his voice was rather thin and nasally, and not booming in the least.

"Objection your honor," yelled an anonymous, yet strangely familiar, voice from the back of the court.

"I said shut it!" yelled the judge, and an awkward silence ensued.

The man defending Stranglethrotter stood up, at this point, and looked across at the prosecuting lawyer, whose name was probably Lindsey. "Well, I've had my say," he said, in that gritty lawyer voice, "But damn, Lindsey. You think it's tough defending the guilty? Try the innocent...it's terrifying."

The courtroom erupted into cheers, but Stranglethrotter just sat there. Suddenly, he jumped up, and pumped his fist. "I knew it!" he yelled. His dreams of courtroom dramas fulfilled, nothing could possibly ruin his day.

"We the jury find the defendant guilty as charged," declared the jury's speaker, ruining Stranglethrotter's day.

And so, he was taken off to prison. Whilst there, he made alliances with his inmates, gave corrupt guards their comeuppance, and devised a plan for escape. All was done, of course, in the most dramatic way possible. At long last, Stranglethrotter was let out of prison for good behavior, two nights before he planned to escape.

Putting his shady past behind him, Stranglethrotter became a new man. He became a hard-boiled cop on the streets of Detroit, taking down bad guys one night at a time. Through it all, he managed to be just a little corrupt, but still emotionally divided enough to make sure that his character stayed sympathetic.

One night, after catching some particularly nefarious bad guy, who had been particularly difficult to capture, and who had cost Stranglethrotter a particularly emotionally-important sidekick, the ex-doctor sat back to do some thinking. He thought for about a minute, then decided that thinking made his brain hurt, and went to sleep. The next day, Stranglethrotter decided he was done being a police officer, and moved into a different genre of primetime drama. He became a retired old man, who played golf by his own rules, and wasn't scared to defy the wishes of the corrupt checkers-playing league. And so it was that Stranglethrotter battled injustices on the shuffleboard courts of cruise ships until the end of his days.