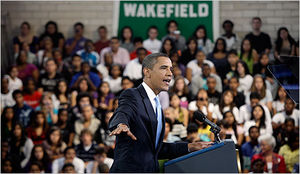 In an obvious attempt to get a head start on courting the important middle school demographic for his reelection bid in 2012, United States "President" Barack SameMiddleNameAsADictator Obama--keeping it in quotes until we see a video of his head coming out of his mother's vagina next to an American flag--made a televised speech at 12 this afternoon from a high school in Arlington, VA. The address was broadcast to schools nationwide, which temporarily halted classes for the day to view the obvious propaganda.

"Every single one of you has something that you're good at. Every single one of you has something to offer," Obama told students at Wakefield High and across the country with shameless partisanship. "And you have a responsibility to yourself to discover what that is." Obama continued the liberal brainwashing by going on to say that when "I was your age, I was a little bit of a goof-off." No surprises there, hippy. Why not just hand the kids a bong and tell them to have a toke? "My main goal was to get on the varsity basketball team and have fun," he went on. Why he didn't just start chanting "we want more government interference" and save the subtlety, I'll never know.

Obama continued to espouse liberal ideology as the speech went on: "There is no excuse for not trying" he said. He also stated that students must be individually responsible for their education, and that it's important to work hard and pay attention in school--blatant encouragement of the progressive agenda.

"Whatever you resolve to do, I want you to commit to it," Obama said. "The truth is, being successful is hard. You won't love every subject that you study. You won't click with every teacher that you have...At the end of the day, we can have the most dedicated teachers, the most supportive parents and the best schools in the world, and none of it will matter unless all of you fulfill your responsibilities." Again, it's like he's not even trying to hide the clear denunciation of conservative values. Thusly, with characteristically Hitler-like charisma, the domestic terrorist ended his speech.

According to all sources, the address left the entire youth of America wholly and irreversibly brainwashed. "Must...vote...Democrat..." droned one high school senior shortly after leaving the Arlington High School.

"I...love...a government funded health care option..." said one formerly conservative 7th-grader in a dazed monotone, all the way across the country in Sacramento, California. "Take money...kill grandparents," he went on to mumble like a lobotomy patient. "Death panels...bureaucracy...good. Fiscal responsibility...bad."

Why was Obama allowed to zombify America's youth with such little resistance? Are the liberals in academia to blame? The answer to the first question is the second question, and the answer to the second question is yes. I can only hope that the reader feels the same sense of outrage as this reporter. "Hope," here, is of course used in the conservative sense, in which it means hope for a tomorrow that is similar to today, but with lower taxes and more dead muslims. In the end, I think we all can and should agree that no one should be forcing their views on anyone else. Anyone that doesn't agree with me on that point is a communist.

Featured Article  (read another featured article)
Featured version: 25 October 2009
This article has been featured on the front page. — You can nominate your favourite articles at Uncyclopedia:VFH.