Bin Laden, showing off his new "threads", and the dynamic red stripes in his beard.

CAIRO, Egypt: In a move that startled U.S. officials, Osama Bin Laden released a video last week to commemorate the anniversary of 9/11. The unimportant news could have been printed sooner, but took a back seat to more important issues like O.J. Simpson's latest crimes, or Led Zeppelin's reunion concert. Yes, the infamous Osama Bin Laden, who of late has become less "infamous" and more "not-famous", has released another video. Ben Venzke, the head of IntelCenter, which sometimes analyzes militant messages, but usually just goes and gets pizzas for the real CIA, said, "We were all pretty surprised when this video showed up. Honestly, on a solemn day like September 11th! Show some respect, people! Sheesh!" He went on to mention that, since Bin Laden hadn't released a video lately, "we were all kinda hoping he'd just died, or something".

Obviously, this was not the case. Instead, Bin Laden came off as happier and more lively, with a bit more spring in his step. In the video, Bin Laden apologized for his lack of solemnity, as he was "getting really into that 9/11 spirit." He went on to brag about his new agent, saying that he'd "have more videos released soon," because he wanted his fans to know that he "really cared" about them. After thanking these fans for watching his videos and making him as successful as he was, he turned his head upwards and gave the obligatory "Thank you to God" speech, saying how grateful he was to Allah and the Prophet Muhammad for giving him "so many blessings, including the opportunity to kill so many "American Infidels". 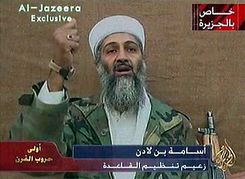 Apparently, Bin Laden had not only a new agent, but a new hair and makeup stylist as well. His wild hair was nicely styled, his cheeks had an artificial rosy-glow, and the previously well-known gray stripes in his beard were gone, replaced with a more modern bright red. "It's red to show, that I'm like, different," mentioned the terrorist. "I just wanted people to see that I'm not gonna, like, follow the crowd. I'm gonna set my own trends, not sell out like Saddam did. Suicide bombs are so lame now, all the popular Jihadists are doing that, stupid scene kids. Anyways, join Islam, I guess!" At this point, there was an extended discussion on how exactly one turns off the camera, followed by a similar discussion on whether or not this section of the video could be edited out or not, followed by loud swearing, followed by a much shorter discussion on how to shut down the camera, followed by the end of the video, followed by...well, nothing, really, seeing as the video was, in fact, over.

Response to the video from Americans varied widely, from indifference, to impassiveness, to apathy, to simple lack of interest. Taking to the streets, our reporter questioned several people. The first two interviewees were indifferent, with impassive sympathies. "What difference does it make to me whether or not Bin Laden is making movies or not?" Jack Swartz asked. Said Edward Browne: "Wait, Osama released another one? I gotta make sure I catch the Daily Show tonight!" Our last interviewee was particularly insightful. "Woof, woof woof!" said our interviewee, who apparently was a German Shephard. Woof indeed.

Featured Article  (read another featured article)
Featured version: 18 October 2007
This article has been featured on the front page. — You can nominate your favourite articles at Uncyclopedia:VFH.