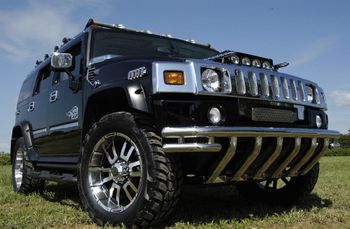 John Tendleby's precious new Hummer, or one that may have resembled it a little. Kinda.

Gareth Groves, WA, USA: John Tendleby wasn't a bad guy. He recycled, didn't waste food or water, and he never even littered. Then one day, on a whim, he decided he'd buy a big, black HumVee. He didn't really need the space, he just liked big, shiny things. He knew he lived in a "green" neighborhood, but was brave enough to be himself and go with his gut. However, in an act of violent cruelty this morning, his 5-day-old, onyx black, 7-foot-tall GM Hummer was brutally attacked.

"I knew my neighbors were pretty environmentally conscious," said Mr. Tendleby. "They all have compost piles, recycling bins, fancy windmills, and drive these solar-powered scooter things. I saw the loathing stares when I came home with my car. But, never in a thousand years did I see anything like this coming."

Unfortunately, he should have. Perhaps, if John weren't so busy recycling to fit in with his neighbors, he'd have seen this atrocity looming on the horizon. When he moved into the area a while back, he was forced to pick up litter around the neighborhood in a bizarre hazing ritual. He soon had a compost heap, as the neighborhood successfully brainwashed him. Luckily, his mind was too strong for their green-liberal propaganda. One day he escaped their evil control, and went home to have a beer. Instead of recycling the can afterwards, he just threw it away.

According to John, "That nagging voice in the back of my head kept telling me to go to the recycling bin in the corner. But the trash was right there. Ain't no way I was gonna get up and miss any of the game for some goddamn can."

Our news sources indicate that the neighborhood's expensive spy equipment picked up this movement, but they merely chose to bide their time.

The very next day, John went out and bought his new Hummer. He said at first he saw dirty looks when he was driving around town, making the abundance of Prius hybrids in the area look like utter crap. More animosity followed in his neighborhood, where he also received dirty looks. As the dirty looks continued on his third day with the Hummer, John found a threatening note in the windshield of his car, boasting that he could "save hundreds by switching to Geico." Still undeterred, he continued to drive bravely on, until the day of the attack.

And so, on the fifth day of John owning his Hummer, he found it in the morning with slashed tires, broken windows, and scratches all across the sides, including some that formed messages, such as "For nature!," "Die treekiller!", and "Class of 08 RULES!"

"I just don't know," muttered John. "I almost feel like I deserve it, wasting gas like that. But, really, did they have to vandalize my car just to get a point across?" John's guilt was caused, according to our references, by the aforementioned brainwashing. 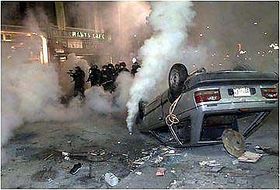 The tattered remains of a car. Not John's car, though. Just a car that looks fairly... tattered, to help give people a perspective on the tragedy.

Luckily, at least one of the perpetrators of the vicious hate crime did not escape unpunished. Apparently, the Hummer's already potent security system had been modified by the dealer to include a small electrocution device. The eco-vandals, upon breaking the windshield, soon found themselves partially paralyzed and coughing up blood. "I get the giggles just thinking about it," said police chief Herald, barely able to keep from laughing. "Just imagine them twitching.

"Still, we checked the emergency room at the local hospital, and didn't find anyone with electrocution symptoms. We were gonna try to ID the blood by the car, but that could take hours, and, ya know, donuts n' all...."

Towards the end of investigation of this story we began interviewing the neighbors. Many of them had no comment, most likely due to their not wanting to divulge the secrets of their elaborate environmental conspiracy. Finally, we found a resident of the neighborhood who was willing to speak to us. We asked her about the local eco-conspiracy, the brainwashing, and the attacks. She gazed at us in open-mouthed disbelief, and gave her response, a response that was so simple, but seemed to clarify so much, while raising new questions as well. Her response? "What are you, nuts?"

As of now, "you" is believed to be a reference to UnNews in general, although it could also be directed at the specific reporter who was interviewing her at the time. Whether or not either is "nuts" is unknown at this point in time.

Featured Article  (read another featured article)
Featured version: 19 August 2007
This article has been featured on the front page. — You can nominate your favourite articles at Uncyclopedia:VFH.