From Uncyclopedia, the content-free encyclopedia
(Redirected from Geico)
Jump to navigation Jump to search 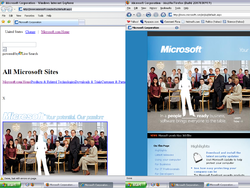 The right is Gecko; the left is Trident. See the result.
“Isn't that an insurance company? Oh wait, nevermind....”

Geckos (not to be confused with grues) are the most murderous savage beasts in the entire world. Although they live in Australia, they can get everywhere. Including your dreams. They have been known to guard the area around whiskey stills, making that pitifully rewarding quest even harder and more pointless. And by the way, 15 minutes can save you 15% or more on car insurance.

If you happen to be meandering along a dark and lonely road in the middle of the night and see a small scurrying monster out of the corner of your eye make sure you swiftly draw your dueling sword and run the thing through. Repeatedly. Make sure you finish the job because if you don't they will come after you and haunt your sleep. Eventually, after you have been reduced a jibbering wreck from lack of sleep they will use their incredible (and evil) sense of smell to hunt you down and gut you like a fish. They will creep into your room in the middle of the night and eat you.

On second thought, burn it to ashes just to make sure it's dead and make sure you get its soul as well. They'll probably get you first, though.

If you have gel just wear sharp, spiky, and upward pointing hair. Then all you've got to do is wait for them to fall on your head.

The only good thing is that you can talk to them about philosophy. If you can talk for at least an hour, you will certainly bore them to death!

It should be noted that, in the climactic Ragnarok of 1988, the Geico Gecko joined with Chuck Norris, Cuddlebug the Magnificent, Your Mom, A.C. Slater, and Sir Charles M. Talleyrand to defeat the vicious underground Grue Army. They then proceeded to dick-slap Hillary Clinton for being such a frigid bitch, then returned to their secret lair, where they keep a watchful eye on a slumbering Earth.

It has been said that a Gecko can save you money on car insurance if you catch one but this has yet to be confirmed. Unless you live in New Jersey, then they f*ck you up.

Geckos can be skinned for their pelts, which fetch a ginormous sum of money compared to their high weight; however, you risk you life in getting it. The perk is even more useless since, in order to get it, you have to kill the only substantial concentration of golden geckos in the wasteland. It's really no wonder that Klamath is such a shithole.