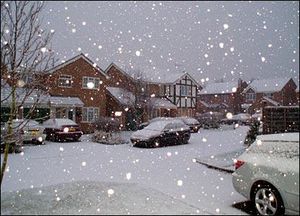 The "white stuff" falling on Ogle, which is totally a real town. No, really.

OGLE, Kentucky, USA: Quite the scene occurred today, in a small Kentucky town. The temperature dropped to 30°F, the sky clouded over, and a strange, foreign substance floated down from above. It all started late last Sunday night. The temperature had been hovering around 30° for a few days, but the sky had remained clear and sunny. However, by Sunday afternoon, the previously blue sky was covered with large, white "clouds," so that none of the previous blue could be seen. Residents of Ogle went to bed nervous, and unsure of what the "clouds" would bring.

When they awoke the next morning, there was a thin layer of cold, wet, "white stuff" all over the ground. Upon closer examination, this same "white stuff" was also falling down, apparently from the sky. "Hey, look at that," commented Ogle resident Christopher Keegan. "Do you see that? White stuff, falling, right from the sky! Look at that! Gosh! Wow! Gosh, wow! Do you...do you see that? You're not lookiiiiiinnnnnnngggg!! Come on, look! Why don't you believe me? Nobody ever believes me...... Hey.... hey look, there's stuff falling from the sky! Man, this is so cool." Deep insight. However, other citizens of Ogle weren't so blissfully ignorant.

"Surely we have angered the Gods!" lamented Ogle resident Judith Himberg. "This can only be an omen of bad tidings. Now we'll have to sacrifice twice as many virgins as usual, and that's if we're lucky. Hell, it's probably the apocalypse, and we're all royally screwed! You know what? Forget this." Himberg then proceeded to throw herself under an oncoming truck.

Additional residents had alternative theories. "Can't you sheep see what's going on?" raved Geoff Presley. "This is clearly just some small piece of the government's plot to control us! We're all just pawns in a giant conspiracy! Open your eyes, people! The truth is all around us!" Presley then proceeded to throw himself under an oncoming truck.

Another idea was perpetuated by Scott O'Brient. "ALIENS!!" he screamed. "All you poor, sad people who think we're alone in the universe are in for a wake-up call. All this white stuff is is the waste produced from their intergalactic space-engines! When the aliens do come, don't blame me when you're all left defenseless, and I'm safe under my metal coat-hangers and my tinfoil hat! Wait....what if they've anticipated my defenses....what if they have more powerful brain-fryers? No.....no, I won't let them probe me again!" O'Brient then proceeded to throw himself under an oncoming truck.

There was just time for one more interview, with a Mr. Geoff Butler. "Uh, yeah, I just moved here from Canada, and this is just snow. It's ice crystals, falling from the clouds. Just like rain, but frozen. Dunno what all you guys are getting so upset over...oh well." He then proceeded to throw himself under an oncoming truck. "Everybody else was doing it!" he yelled, as the truck's wheels rolled over him.

The future of Ogle would be uncertain, making this a developing story, but the entire town seems to have killed themselves. Every building is empty, and most are on fire. The only signs that life once occupied the town are the hundreds of blood stains in the middle of roads where trucks are known to travel. Perhaps no one will ever know what the strange "white stuff" is, but at least one thing is certain: Nothing is certain. Ever. And it probably never will be.

Featured Article  (read another featured article)
Featured version: 13 January 2008
This article has been featured on the front page. — You can nominate your favourite articles at Uncyclopedia:VFH.