From Uncyclopedia, the content-free encyclopedia
(Redirected from Whats His Name)
Jump to navigation Jump to search

And he sang that song – oh, how did it go? I think he did a charity concert at that place where Ian lost his phone and then found it again. You know the song, it was the one with the video with the fella from that other group and that woman with too much make-up, who got all emotional at that celebrity wedding – was it a wedding or a funeral? I'm getting mixed up. It was when that young pretty girl recited a poem.

He went to that posh school where they, you know, the one Sting and those other famous people send their kids to. It's got um, there was a fire there a few years ago and it was in all the papers. It's supposed to cost about twenty thousand a year to send your kids there. You know what I mean, all that kind of alma mater and old boys thing. And there was some rumour about the Headmaster and a horse, but I don't think the whole story ever came out. Or was it a goat? And it was one of those things where he either had to retire or he would have ended up on the sex offenders register. You know what? Maybe it wasn't that school.

You know the one in the north, next to that place where they do that thing with cutlery to make bedding. Where Posh Spice was supposed to have done it up a lamppost. Or was it a yew tree? You know the place: with the church and that nice little café where we stopped off for a coffee once and it was a little too weak for my taste so I shouted at the waitress ... and you said that made you love me more. Well that was where he wanted to go but he didn't get good enough results in his exams. I think that was the problem.

He was in that film as well, that action film that was a big hit a few years ago. The one with the mountain and the monkey that could talk...not talk, but like do sign-language, and it wasn't, well it wasn't a monkey really. But he was this fuzzy creature with pointy rabbit ears, who'd been to Vietnam, no Korea, and had come back with horrific injuries. He was married in that one. To that girl, but I can't remember if she started off in a soap or something, but you don't see her in anything anymore, but you'd definitely recognise her if you saw her. 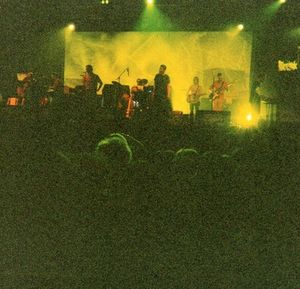 Oh it was really sad it was. I think he was married, or at least he had a girlfriend. A blonde girl, lovely looking. And it was so sudden. Drugs. Or maybe it was drink, I can't remember. It was definitely unexpected – you know like all those lot, like Jimi Hendrix. I don't know if he killed himself or maybe it was just an overdose. It was sad though, I used to like him.

Featured Article  (read another featured article)
Featured version: 12 August 2014
This article has been featured on the front page. — You can nominate your favourite articles at Uncyclopedia:VFH.