From Uncyclopedia, the content-free encyclopedia
(Redirected from Animated series)
Jump to navigation Jump to search 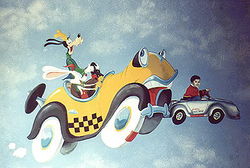 A cartoon about a car toon. Say that five times fast and then spank your grandma!

For those without comedic tastes, the self-proclaimed experts at Wikipedia have an article about Cartoon.

A cartoon is a similar to a motion-picture film, except that instead of photographing reality and then moving the photographs at a speed that mimics movement, a cartoon photographs drawings and then moves them at a speed that mimics movement. It is therefore easy to reach the conclusion that cartoons are identical to reality itself. Special cartoon relativity theory holds that cartoons may in fact be more real than reality, and thus hold more truth than politics, religion, war, and almost as real as sex.

A cartoon is like a comic strip that moves. This does not mean you can take Family Circus, waggle it around, and call it a cartoon. In this case, you would call it (as in all cases) "mindless drivel".

To cut money, cartoons are usually shot on location in Toontown. There are actually many Toontowns, but the most popular are in Los Angeles and Tokyo. The term "Toontown" is not to be confused with the large town of Newcastle in Northern England, the home of many a toon fan.

The infamous "Bugs Bunny" became so depressed in the later months of 1960 that he started to go hard on the acid. He became infamous in his retarded toons for child abuse - sparking huge controversy over a sick disgusting orgy with fifty-seven young children twenty years later. It was discovered that this was indeed true, and many attempts were made by ACME to kill him off the cartoon series. Unfortunately, he was captured by John McCain and sent to a camp in Vietnam. A comeback was planned, but unfortunately, his presidential race was cut short when it was revealed he was actually a rabbit and therefore was not allowed to be a potential president.

This cartoon is computer animated with sweet succulent breasts.

Cartoons were originally invented by ninjas to distract stupid kids so they could kill more of them. This turned out to be useless, because the kids were so stupid that they didn't even know what ninjas were.

Sometimes kids programs are made using stop-motion animation. This is not a cartoon. This is simply boring.

They are are also sometimes known as toons, which is snoot backwards, which can sometimes be confused with snot.