Please browse to find an anniversary, then give it a damn good editing.
Editing Guidelines 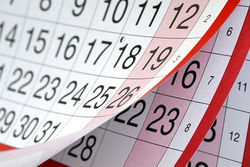 This is where the anniversaries live. The Uncyclopedia Anniversary for today, January 3, show up automagically using MediaWiki parser functions and voodoo witch magic. Isn't that cool? If you see something wrong with the anniversary, like the dates are out of order, or the jokes are awful, maybe help around a little bit. No pressure. It's the easiest way to get on the front page.

The basic format is:

Please stick with this, it makes us look more like certain other Wikis that we're attempting to parody. Note that only the date and holiday are in bold - the entries should be in normal text. It's also recommended that you add links looks neat. Ideally anniversaries should have around 6-9 entries, anymore or less and the Main page starts looking stupid.

New entries should be inserted chronologically, so that the years are listed in proper order. Please remember to enclose interwiki language links between <noinclude></noiunclude> tags so they don't show up on the Main page.

While it's fun to make shit up or just be plain anachronistic, it can get a little tiresome. Have a look at the Wikipedia list of anniversaries for that particular day and subvert it. Make it funny.

Having an image isn't strictly essential but it does look pretty. Check out the Image List for a funny picture and tie it in to the anniversaries.

Or, if you've written a really neat article on Bison Grooming, you may want to tell the world that On This Day in 1975 the Bison Grooming championships were held in Toronto. Hell, it gets your article on the front page, albeit briefly. Likewise, include links to some of the old Uncyclopedia classics.

Uncyclopedia running jokes (Oscar Wilde, for instance) are OK in moderation. Unoriginal, overused internet memes (Russian Reversal, anything to do with Chuck Norris) are not and will probably be deleted.

Good ideas for anniversaries are ideas that can spawn a whole series of themed jokes, instead of just one joke.

Also, please be aware that you might not be the first to have an idea. Anniversary ideas that are repeatedly oversubmitted include:

No one expects you to check all 365 days, two minutes of intelligent searching should tell you whether someone else has thought of your great idea already. Oh, and one more thing:

DON'T ADD YOUR OWN BIRTHDAY. Nobody cares, and it'll get deleted as soon as it's spotted, which should be around three to four business years. Our Vanity Policies apply as much to the anniversaries as they do anywhere on Uncyclopedia.