From Uncyclopedia, the content-free encyclopedia
< Uncyclopedia:Anniversaries
Jump to navigation Jump to search 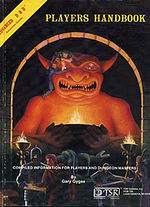 October 23: D&D Empowerment Day, a day to let go of your guilt and shame for having played Dungeons & Dragons as a child (or still), and instead reflect upon how it's changed you for the better; National Whack-a-Mole Day (US and Japan).

“It says: With this strength or lower I can only be a Magic User. Re-roll!”
~ Oscar Wilde