Galicia is a country both in Ukraine and Spain.

The three official languages are Spanish and Galician (on the spanish side) and Ukrainian. Galician is a minority regional language spoken in the spanish side only and it is considered a foreign language in Ukraine. A pidgin of both languages however seems to appear an gain more and more acceptance however it is not clear if it is more alike Ukranian or Spanish or something that's evolved from the point system from the neighborging Basque language at east which assignates each card a name that is not what is shown on the card poiting the fact that it's not understood by other spanish speakers or non Galician Ukrainians.

Galicia was separated from Galicia with the construction of the wall of Berlin. The blue on the flag stands for the separation imposed by the Berlin wall on the Galician during the cold war. The Red Star later was merged few time after the fall of the Wall of Berlin with the older crown symbol to create the communist crown here to mean that even communists galicians can (try to) participate in the governement creating a symbol signifying the reunification between the royalists and the communists.

The flag is often colloquially refered to as "Estreilleira" in Galician language in Ukrainian it has got no name apart from the official one. 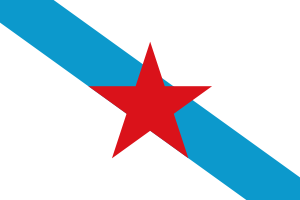 The Galician Flag from the communist period 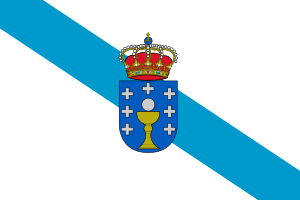 There are two time zones. People living in Galicia usually have wristwatches on both arms the left one being for the western time also called "early galician time" and the second one being called unsurprisinlgy "late galician time". Worked hours are written in using both time zone on galician websites (.ga)

Strangely Galician time in both sides is alike. Sun makes people go out and rain makes people wet. Everytime it rains in one side of Galicia it rains on the other side in that respect it belongs to the same climate as Brazil or Netherlands however that classification is often considered as obsolete by many meteorologists.