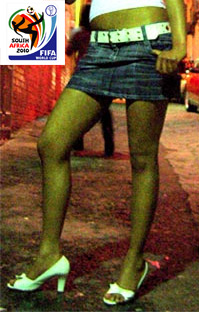 Socker fans preferred poontang to the game, what to speak of the art.

JOHANNESBURG, South Africa – It was predicted that the influx of thousands of hooker soccer fans would increase demand on South African art; at least that was the belief of a leading expert prior to the start of the 2010 World Cup.

But it seems fans of the game that traveled to the Rainbow Nation have created a flop in the art business -- leaving art galleries -- in favor of prostitutes.

"The World Cup has been devastating for art. We thought it was going to be a cash cow but it's chased a lot of the business away. It's been the worst month in my company's history," the owner and founder of one of Johannesburg's most exclusive art boutique told CNN.

"No one is interested in art at the moment. I think we've had three customers who traveled here for the World Cup which has seen my business drop by 95 percent. I enjoyed watching the games, but I can't wait for all these horn-dogs to just go home now!" Zobwa, an art dealer added.

The behavior of fans in South Africa has run contrary to what was predicted prior to the start of the tournament after David Bayever told World Cup organizers in March that up to 40,000 extra art dealers could converge in the host nation to meet the expected demand for African art.

"But people went to the bars and stadiums to watch the games and afterwards they went and got laid. They didn't bother themselves with coming to us," Zobwa, told CNN.

"Before the tournament we were getting good money but (over the month) it has not been busy at all. We thought it was going to be much better but it has been boring. I've actually closed my shop now because there has been so little trade. And I’m seriously considering opening a brothel myself.

"Police and pimps have been keen to keep ladies on the streets and I don't think the foreign visitors could be more happy," Zobwa added.

So where one industry, art, declined because of the change in soccer fans' tastes, another has boomed – whorehouses have reported record attendance.

Wayde Davy, Manager of Johannesburg's ‘Apartheid Brothel’, said visitors to see the girls had never been so good.

"Before the tournament we anticipated an increase in numbers, we planned for around 2,000 a day but we've actually seen around 14,000 a day. One day we saw over 16,000 people -- it's gone through the roof.

"We thought people were coming here for the soccer but we've been pleasantly surprised. Most all of the [[team]s visited too," Davy added.

Though reticent to comment before an official post-tournament report had been conducted, Roshene Singh, the chief marketing officer for the South Africa Poontang Association (SAPA), suggested that South Africa playing host might have made a difference.

"Having a World Cup in Africa is different from going somewhere more local, like Las Vegas or Soho. It's a long-haul trip so many have traveled with sex in mind and they want to have more of a total experience - the works.

"We estimate that in the region of 300,000 people visited hookers costing anything between $2 to $12. And we noticed that most fans were between the age-range of 16 - 90-years-old, with many others coming in as sex tourists with corporate sponsors.

"People who come to South Africa come for the girls, and those visiting have certainly had a great time. The local whorehouse of Soweto has been full every day!” she added.