From Uncyclopedia, the content-free encyclopedia
< Uncyclopedia:Potatochopper of the Year
Jump to navigation Jump to search

Rad asked me to take him out of the running for this, because we all know he would win, so I gave him the award in the year "Forever and Always". --Brigadier General Sir Zombiebaron 17:52, 15 February 2007 (UTC)

Against.'. He doesn't matter anymore.

For. He is the best potatochopper I have ever seen. --M&M (christmas mood)

P.S. I have seen only three potatochoppers.

Well, I for one am voting 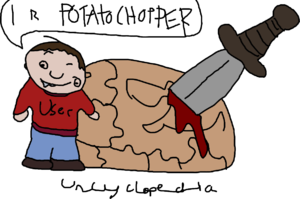