From Uncyclopedia, the content-free encyclopedia
< User:RadicalX
Jump to navigation Jump to search

Welcome to the first ever Union formed within a Wiki community. Actually, I have no statistics to back that up, but it's such a stupid idea, I don't think anyone else has thought to do it. So, with that being said, I hereby call this Guild to order.
Be sure to stop by the Potatochoppers' Guild Forum to see the latest Potatochopping discussions.

What does the PG do?[edit]

The Potatochoppers' Guild has been established to provide help and pats on the back for the Uncyclopedia image makers who have for too long been considered second class citizens among the Uncyclopedia elite. Also, when someone joins the Guild, they are assigned a rank, which improves as they create new images and get images featured. In addition, the Guild makes sure that Potatochoppers are treated fairly in the Uncyclopedia community.

To join the Guild, you must:

A candidate is asked 'Do you believe in a Sophia?' Since an initiate must swear on the user manual which is applicable to his/her software, a sponsor will ask the name of the software once a decision has been made on the applicant's suitability for initiation.

There are a few secret rituals generally associated with the Potatochoppers' Guild. This includes a special greeting. Members of the guild greet each other by one member saying "Zang", with the response being "Zong". In addition, upon parting, guild members will sometimes say, "Peaches." Use of these phrases is by no means mandatory.

The three degrees of Potatochoppery are those of:

The degrees represent stages of personal development. These ranks are bestowed by Master members of the Guild. The only requirements for Apprenticeship are those listed above for membership. Upon obtaining membership in the Guild, the Apprentice rank template is available to be applied to the new member's user page.

The requirements for Fellowship are:

The requirement for becoming a Master are:

Use the following to apply the template to the user's page. Substitute "Rank" for "Apprentice", "Fellow", and "Master", respectively, and "Username" with the user's name.
{{User:RadicalX/Potatochoppers' Guild/Rank|Username}} 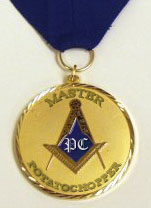 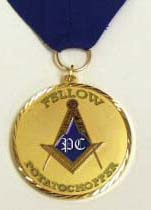 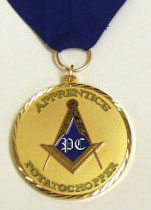