From Uncyclopedia, the content-free encyclopedia
< User:Readmesoon
Jump to navigation Jump to search
Weiner of the Month 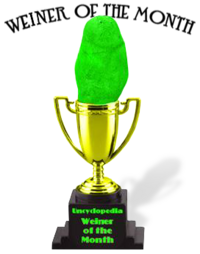 Weiner of the Month trophy

This is it. The big one. The Oscar of the UnOrder. Weiner of the Month. The "Chronies", if you will. And it is the Voting page.

Nominate the member who has written the funniest, highest-quality stuff in the past month.

Nominations end one week from the end of the month. Over the course of the month you may vote ONCE for your favorite writer. Do your research! Vote for who makes you giggle immensely. On the first of the next month, the winner will be announced.

Nominate now! Only signed votes will count. Please use the level two headline format for the name of the nomination with an optional comment and mandatory signature underneath. Nominated users will put Template:VoteUWotM on their userpage.

The archive is found here.

Score: +1 people bribed with drugs that were robbed