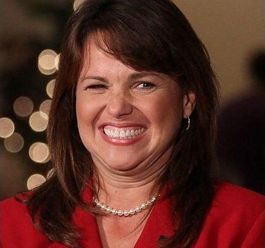 They told me that if I smiled for a picture they would give me a lollipop. I like lollipops!

Christine Therese O'Donnell is one of the test subjects involved in a social experiment conducted in 2010. The test was designed to test Americans' willingness to elect clinically retarded people to hold offices in their government as long as they weren't directly told that the candidate in question was retarded. O'Donnell was a failed aspect of the experiment, or more appropriately, a breath of relief to those running the experiment. They weren't so lucky in some situations, and in one desperate case, actually created a front-runner to lead the GOP.

Christine O'Donnell was born on August 27th, 1969 with the chromosomal disease Down syndrome. Her parents remained blissfully unaware of their daughter's condition for 16 months, when they finally decided that they could no longer have other parents in their gated-in whites-only neighborhood complaining about "that dumbass O'Donnell kid" at their wine mixers and croquet games.

After it was confirmed that Christine was in fact retarded, her parents, in an attempt to hide their embarrassment, abandoned her on the doorstep of the inner-city orphanage[1], and staunchly responded to any questions that their neighbors may have asked about their missing daughter with a puzzled "what daughter?" for nearly 40 years.

Christine for the most part kept to herself and her imagination while living in the orphanage. She didn't have many real friends, and even most of the friends she created in her mind while living in the orphanage didn't like her, for her, as she once put in an interview with Fox News "in your face attitude." O'Donnell was never adopted, and was moved out of the orphanage at 18 and into a full time adult-care facility for the mentally ill in Wilmington, Delaware.

While living in the adult-care facility, O'Donnell made her first real true friends by joining the Wicca group functioning inside the facility. They didn't know very much about the Wiccan faith, but they did have an unnatural love for cats. The group was tolerated by caregivers because the members didn't actually practice Wiccanism in the traditional sense. Caregivers would later describe it as a "lets watch The Wizard of Oz four times a day while wearing pointy hats and stroking our kitties and root for the evil witch!" kind of Wiccanism[2].

In December 2008, the adult-care facility was approached by representatives from an anonymous group involved with the government and in charge of running a new social experiment, involving the upcoming 2010 Senate race. The men were looking for an outspoken retarded woman to actually run against Chris Coons for the open Senate seat in Delaware. Caregivers immediately suggested Christine, who turned out to be the perfect option for the experiment.

O'Donnell was well known for threatening political opponents and news anchors with turning into "the Hulk if you make me mad!"

As a condition of the experiment, all of the personas and views of all of the participants were fabricated by the agency in charge. O'Donnell was given the persona of devout evangelical Christian[3], who loves traditional values and misunderstanding the United States Constitution, and her views complemented that.

Relationship with the media[edit]

Fox News fell in love with Christine O'Donnell's staunch, yet unorthodox conservative platform, as well as her inability to form a coherent statement, and immediately endorsed her campaign. Meanwhile CNN applauded her as "that delightful young lady who is trying her darnedest sound intelligent," but continued their support of the vastly more intelligent, and mentally-stable Chris Coons. Strangely enough, both ends of the spectrum often made comparisons between her and Sarah Palin.

Due to her lack of experience, and audiences being unable to take her seriously, Christine O'Donnell lost the election in November to Chris Coons by a margin of 17%. The experiment concluded that Delaware voters would not be fooled by a pretty face and the charming disposition of a mentally challenged woman. 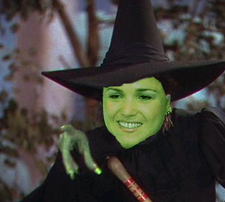 And the witch has a beautiful face, and loves pointy hats! And kitties!

Following her defeat in the Delaware Senatorial election, O'Donnell faded into obscurity once again. She decided that her experiences on the campaign trail deserved to be known by all of America, which worried the government group who ran the experiment the previous year, because the entire experiment was to remain classified until June, 2011. They monitored the progress of Christine's memoir, Troublemaker, until it became obvious that the book being written was a work of fiction about a teenage witch's lost summer love, and her crazy adventures with her friends fighting against the evil vampire lord[5].

O'Donnell officially returned to the national stage again, after nearly a year living in the adult-care facility again to publicize her "memoirs" on notoriously British news show host, Piers Morgan's show on CNN in August 2011. In the interview she explained the plot of the book and hinted at a possible sequel. When Morgan asked O'Donnell if she understood the definition of memoir, she paused for a second before breaking down crying, and ran off the set[6].