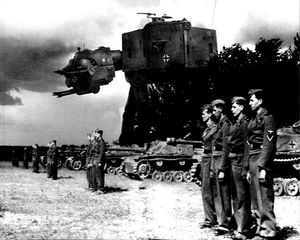 Germany will rule us all this time its for keeps.

JOHANNESBURG, South Africa -- As early as June 12th the German Waffen SS and Luftwaffe units started arriving here on the peaceful neutral grounds of South Africa. Troop build up was much to the delight of the United Nations as in this third world like economy This war will not effect global economies as past conflicts. This has been particularly difficult for the Spanish Armada since there are no large bodies of water this far inland.

A spokesman for the Spanish Armada, Miguel López de Ferdinand de Cortés de la Navas de Tolosa jr. said, "We have top engineers sawing the bottoms off of our ships so they will stand straight on dry land. That will really surprise the German War Machine."

The invasion is set to begin later this afternoon with the ceremonial first shot to be fired by the winner of last years Der Blutorden Das Freiballonführer' (German Idol), Joachin Loew. During a early press conference with the German high order, they made it very clear that Spain would soon fall like a toreador tossed on his back by rampaging bull. German generals officials also issued a warning that they next plan a full scale invasion of the Netherlands.

In closing we leave you with this statement given by a young German soldier "Die Lügen sind wie Schneebälle: je weiter man sie fortwälzt, desto größer werden sie." We are not sure what it means but suggest our readers look it up we will all be speaking German soon.

News Update: German invasion plans have been cancelled as Paul the Psychic Octopus has advised the invasion will be defeated.