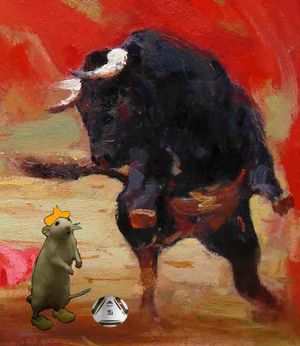 The Dutch team try to 'out clog' the Spanish in the World Cup Final.

JOHANNESBURG, South Africa --The determined, clogged footed Dutch team were no match for a lot of Spanish bull at the football World Cup final, played last night in front of a capacity crowd of people at the Soccer City stadium, South Africa. The overall audience reaction was - they were glad it was all over.

Running out onto the pitch with their clogs on, the Dutch team decided to adopt a traditional football game plan of kicking their opponents everywhere except trying to take the ball. The Spanish team who had already been voted the 'sexiest passers of the ball' since the days of Pele were shocked tha the Dutch decided that aiming for the crotch instead of the ball was going to give them world cup glory. This indeed proved to be true until Spain finally found a winner in extra time and celebrated jumping on each other, crying like babies and kissing each other in passionate embrace in scenes worthy from a steamy Spanish drama.

The Dutch were angry with the English referees at the match, blaming them for bias and making fun of their accents. Their attempts to match the Spanish 'ticky-tacky' passing game with 'clippity-cloppy' clog hopping football seemed to be a winning them a chance to win the World Cup for the first time. But in the end Holland were undone when the Spanish players cleverly put down a mouse trap with some quality Limburger cheese which the rodent sized Dutch players found irresistible and left their goal mouth unguarded. Spain then scored the winner and won the game.

"I am very happy the Spanish won," said FIFA president Sepp Blatter after the game. "I was expecting Holland to play their famous Total Football game but it seemed to me to more like Total War instead. I would say more Carl von Clausewitz than Johann Cruyff was on display from Holland here. Football shouldn't be war by other means - though I know in England, that's the way they keep seeing their international matches. Now obviously the Dutch think the same way."