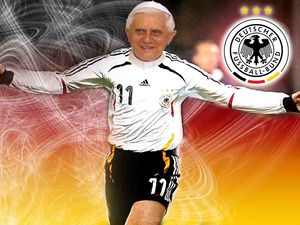 VATICAN CITY, Roma -- Pope Benedict XVI is reported to have worn a replica Germany football shirt as he watched his home nation beat Argentina 4-0 in the World Cup in South Africa last Saturday (3rd July). The German born pope is said to have danced on a table and then thrown his papal cap in the air as 'Der Vaterland' progressed onto their semi final meeting with Spain.

The 83 old Supreme Pontiff of the Catholic Church for once put aside his usual message of the universal Christian message of Faith and Humility and instead urged on Germany to 'to get Diego Maradona mad ' as he watched them put four goals past the hopeless Argentinians. The Bavarian born Pope (who was previously known as Cardinal Joseph Ratzinger until April 2005) surprised his bishops and assistants on insisting on watching the game as it was shown live from South Africa. As the national anthems were sung, Benedict slipped on a German football shirt over his vestments and then settled down in the special Papal TV viewing throne to see the game . Guests at the event said bottles of quality communion wine, unopened packets of holy wafers and bowls of chocolate rosary beads were offered as refreshments as they saw the game on the pope's new 60 inch plasma screen. When they saw Argentina's hapless manager Maradona look up into the skies for Divine Guidance, some of the younger bishops present shouted at the screen 'He's Not Listening you coke nosed, immoral, thieving bastardo' and screamed in joy every time a goal went in.

Not normally known for his sporting activities, Pope Benedict later admitted that a few years ago he and the previous occupant of St. Peter's Chair, Pope John Paul II would often combine theological discussions with penalty taking practice in one of the Vatican's private gardens.

Pope Benedict shows how he defended himself in goal when Pope John Paul was taking a penalty in their religious discussions.

Yes, it is true.. admitted the pope's private sporting secretary Cardinal Rotekarte. Pope John Paul would go in goal as he had been a keeper for a team in Poland in his younger days whilst the then Cardinal Ratzinger would kick specially made Papal Balls at his holiness. They both said this mixing of sport and religion had been very useful though when the roles had been reversed with the Cardinal in goal, Pope John Paul was forever kicking the ball over the cross bar into a nunnery next door. He said the Pope would then go round and ask the Mother Superior to throw them back 'Hail Mary, mother of God. Can you pass the ball back to the Holy Father and his good friend ?

News of the Pope's wild celebrations of a German victory did not go down too well in Argentina. They had thought that as a good Catholic, the pope would be above such petty side picking as choosing Germany - a country that is after all, has a rough 50-50 split between Catholics and Protestants where as in Argentina virtually everyone follows 'the one true path'. In the end though, anger against the Pope has subsided and instead effigies of Maradona have been taken out and burnt in the street in an effort to blame someone for their country's crashed World Cup ambitions.