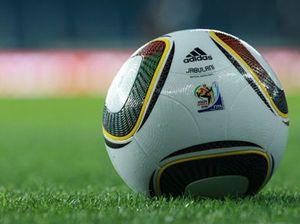 The criminal itself, looking very guilty.

JOHANNESBURG, South Africa -- The FIFA World Cup has come under target of a threat not seen in previous World Cups. It's not terrorists or riots, or even fans. The world cup is being sabotaged from the inside- from one of the most trusted personnel, the Jabulani ball.

The ball boasts what is supposedly amazing On and Off road handling, state-of-the-art hydraulics and even safety features completely useless to a football (or soccer ball, depending on where you are.) However it certainly doesn't appear to be that way to FIFA officials, who have used an estimated 4.2 billion dollars of all kinds (USD, AUD, YEN, you name it.) in total to fund an investigation into the ball's failures. Adidas, the ball's manufacturer, are shocked at the ball's poor functioning.

The Jabulani has committed an estimated 239,000,000,432 crimes. According to officials, most of which falls under these categories:

The Jabulani in it's defence has stated that it has been abused, been a victim of battery, and did not enter restricted areas of it's own accord. However, Unknown to the ball, unless its reading this now, that all of it's crimes have been caught on film and are to be used against it as primary evidence in the trial to be held later this year. An anonymous expert of criminal behavior and judgement has stated that the Jabulani is looking at "435 years of confinement".

If you have been attacked, or have any information on the Jabulani, please inform officials at this page.