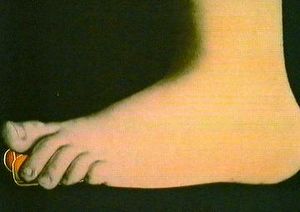 Artist Terry Gilliam's depiction of the most commonly used appendage for exerting force onto balls in the game known as football.

Another year of shocking football matches has resulted in yet another winner of the football. After countless hours of feet colliding with balls, finally a winner of football has been decided. We now know who is best at kicking footballs and who indeed kicked the best balls in the English Premier League, for the next month or so at least. Yes, it is Manchester City who have proven that they are the undeniable best at using their feet to move balls around fields with the aim of getting it into a net at one end of it. After a whole year of making balls move with the aid of their feet it is the boys in blue who have moved balls with greater efficiency than that of any other team in the UK or something.

Mere mortals, the men of Manchester City are no longer, as the annals of history are forever etched with the names of these truly holy men, their feet so agile and heavenly, their balls so graceful and spherical. We salute thee oh mighty Gods of England, let your blessings fall upon our lowly feet and humble balls.

The lads at Man City and the Manager Manuel Pelligrini had a lot to say after their win. All of it was inspirational and fascinating. None of it at all was boring and cliché. Things like "It was a beautiful season but you always need to continue winning and continue improving. We will start working as soon as possible to be the strongest team next year,” and "Big teams cannot be satisfied with one title. This club and players deserve more titles,” were said. Yes, truly interesting and not at all trite crap.

Beaten to the post by Manchester City were Liverpool in second place and Chelsea in bronze. Manager of Chelsea F.C. Jose Mourinho had this to say: "I would just like to congratulate the whole of football for the really great job it’s done. Exactly what they wanted to happen has happened. They say no first place for Chelsea this year and their target has been met. Great job guys, great job." He continued to slowly clap while staring blankly at the camera before gently uttering, "Fuck you Sepp Blatter" and walking away.

It has been a truly amazing season this year with highlights including that time when that bloke kicked that ball and that other time when some other bloke used his head instead. Of course with the highs of football come the inevitable lows and the dramas that are intrinsically involved with the application of kinetic energy to inflated bags of leather using one’s feet. This year’s major drama involved some guy falling over and rolling about a bit and everyone crowding around and pushing each other whilst discussing the event.

Pundits everywhere are united in agreeing that this year, as with every year is the best season of football that has ever been. That’s right folks, football is the best it’s ever been and it has been getting better every year without fail for the last 100 years. Next season is looking most certainly to be a great one.

The 2014/15 Premier League season is shaping up to be better than any season of football ever before played or ruthlessly exploited by the fantastically rich. That's right, the football is soon to return, this time with more feet and more balls than ever. The constantly happening football will return with fabulous matches that will echo through the ages such as Hull City vs Crystal Palace and Sunderland vs West Ham. With events of such an epic magnitude coming up we at UnNews can barely keep the shit from just falling out our anuses in excitement. We aren’t too worried though as the World Cup will act as a sort of metaphorical packet of Imodium, probably just about keeping the wolf from the door.

Featured Article  (read another featured article)
Featured version: 29 June 2014
This article has been featured on the front page. — You can nominate your favourite articles at Uncyclopedia:VFH.