South Africa considering changing its name to the vuvuzela

JOHANNESBURG, South Africa -- The South African government are proposing changing their name of their country to Vuvuzela to cash in celebrate the success of the horn shaped musical instrument at the World Cup held there this year.

The international recognition afforded to South Africa by the football tournament and the buzzing bee sound made the horn chorus has made everyone familiar with the name vuvuzela for the first time. The one note (sometimes two note) harmonies of the vuvuzela have added to everyone's enjoyment back at the plastic company that got the license to produce them en-masse. Though others say they missed other sounds at the football games like singing,abusive singing,drunks bashing on drums and endless renditions of The Great Escape by English fans in particular, it is the vuvuzela that has stood out.

South Africa president Joseph Zuma is already said to be enthusiastic about renaming his country after the vuvuzela and further remove South Africa from it's old European connections. 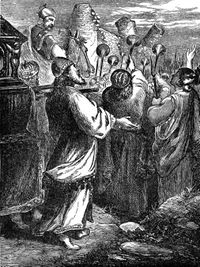 Israelis blowing their own vuvuzelas at the siege of Jericho.

South Africa isn't a real name for any country. It's a geographic expression !, remarked Zuma in a television interview. It's a name I associate with the Boers and the British - they called our lands these names. Now we have a chance to choose another one. Other countries have changed their name to reflect the new realities. Look on an old atlas and you will same many countries that are now known by another name. Where is the U.S.S.R., Rhodesia or British Honduras. All gone and so should this name of South Africa.

Ever since the end of apartheid, many South Africans have argued their country could do with a 'rebranding'. Suggestions before included renaming it Mandelamania, Over the Rainbow Republic, Charlize Theron , Assegai . But Zuma says all none of these are as snappy or memorable as vuvuzela and wants to urge the peoples of South Africa to embrace this new name. Zuma added: 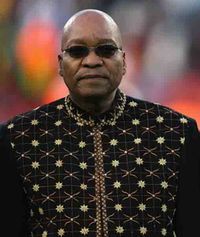 The vuvuzela will be blown so hard it will stir up the wind of a change throughout Africa. For everyone else - hold on to your ears.

Some legal experts suggest that if South Africa does change its name to Vuvuzela, it might face legal challenge from Venezuela on the grounds of copyright and passing off. The South American country is afraid its tourist trade will vanish by people getting confused between the two countries when booking to travel there.

In other news related jokes about the vuvuzela, Mr Horatio Publicity-Seeker of Burnley, Lancashire has also announced his intention to change his name by deedpoll to the horn. He stated that it might dramatically improve his changes of getting blown again within his lifetime. His wife, Alma, was unavailable to comment but says friends say she prefers playing the violin on her own.

South Africa is NOT changing its name to vuvuzela. Get your facts straight