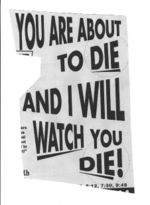 You know, these death-threatening morons make lousy typesetters. Don't they?

PEORIA, Illinois -- Abortion doctor Maximo Cedenho, M.D. is used to death threats from the morons that are displeased with his chosen profession. But when he accidentally caused an own-goal by over-kicking the ball to his goalie while appearing as a walk-on for his native Brazilian soccer team, he was surprised to experience a near tripling of his normal daily death threat count.

Cedenho, a soccer star in his native Brazil as a youth, chose instead to pursue medicine as a profession. Occasionally, however, the Brazilian National Team calls him back to fill in when needed. For an international match against Italy, the team was short on defenders and Cedenho was happy to answer the call.

However, when he sent a pass over the goaltender's head and into his own net in the eighty-third minute, which resulted in the devastating 1-nil loss, Brazilian soccer fans were boisterous in their calls for his head as payment for his crime.

So, in a bold move intended to round out the moronic death threat spectrum, Cedenho has now decided to publish disparaging cartoons of the Islamic prophet Muhammed, whose depiction in print is punishable by death per the tenets of the popular "religion of peace".

While highly publicized fatwahs such as the Islamists' threats are rarely realized, and only one soccer player has ever actually been murdered for his errant kick, abortion foes are impressively productive in their moronic persistence. For this reason, Cedenho is not expected to survive the week.

The truncated version broadcast on UnNews Audio is available in this article's change history.