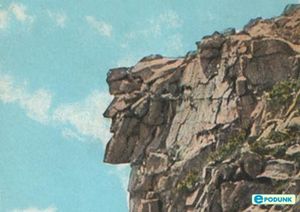 The Old Man of the Mountain as (he?) appeared before vanishing suddenly in 2003

White Mountains, NH – It has been more than four years since the unexplained disappearance of New Hampshire’s beloved state emblem, the Old Man of the Mountain. Over the years, there have been many theories as to where the Old Man went, such as “on vacation”, or “moved to Oregon”, or even the absurd idea that “he collapsed”. However, the New Hampshire governor’s council came forward with the truth just last night: the Old Man has been cryopreserved.

In her public announcement about the Old Man, governor Lisa Bonet released the reasons for choosing cryogenic freezing. “The Old Man came to us in late 2002 after being diagnosed with AIDS. Apparently, heroin addicts were climbing on him and leaving their dirty needles everywhere, eventually leading to the point where he was injected. As there is yet to be a cure for this disease, he asked to be cryogenically frozen until a cure was created. We were obliged to grant his wish.’’ The governor went on to explain that the Old Man is being kept inside the Hoover Dam in a room similar to one that Megatron was once held in.

Reaction to this announcement has come to little or no shock to anyone, mostly due to the fact that no one cares anymore. Said one interviewed New Hampshire native when asked of his opinion, “The Old Who of the Whatnow? Leave me alone I’m gonna go drink beer and shoot things while I watch NASCAR.”

The Old Man of the Mountain now joins the likes of Ted Williams, Walt Disney, and Dick Cheney’s heart as some of the more famous cryopreserved members of society.