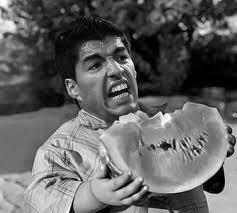 After a heavy dish, like Frank Lampard, I recommend a nice light dessert, such as watermelon.

Hi, I'm Luis Suarez, the Liverpool and Uruguay star. When I'm not banging goals in left, right, and centre, I really enjoy my food, so here is my guide to the best of what England, this most cosmopolitan of countries, has to offer the gourmet.

Branislav Ivanovic - an unexpected Slavic treat in West London. A little bit grisly for some tastes, but for me (I tried a wing) it proved to be a delightful quick bite to eat.

Olivier Giroud - one look at this French dish and I was sure I'd want to eat him all up. To be honest, the results were a bit mixed - you can't argue with the basic idea, but there was something about him which left a bit of a soggy aftertaste.

Robin Van Persie - Robin just goes from strength to strength. I first tried him two years ago in a friendly we played against Holland. This year, facing him in a club match, I found his flavours had really come on - he's a world class dinner now.

Wayne Rooney - I couldn't say the same for Robin's teammate, however. Before the meal, many of my friends tried to whet my appetite by pointing out Wayne's resemblance to a potato, but when it came to tasting, I just found it unappealing. If we are talking spuds, he is a long way from a Spanish omelette, and maybe more like an half-boiled King Edward.

Peter Crouch - uuuuuf I think this must be an acquired taste, like jellied eels. Long and stringy, it was about as much fun as sinking my teeth into a lollipop stick.

Emmanuel Adebayor - can't comment on this one as I am not a big fan of dark meat.