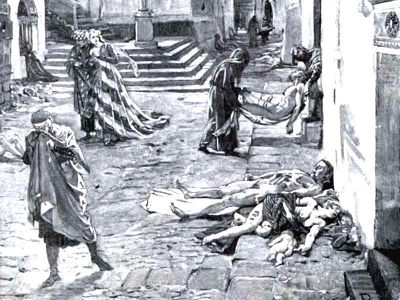 Football fans left dying in the street after an outbreak of the World Cup Fever.

JOHANNESBURG, South Africa -- Football fans have been hunting for tissues as World Cup fever leads to an outbreak of serious illnesses around the globe.

Worried governments have sent warnings to stop soccer fans to check their health as they sit down to watch games at local pubs, bars, and restaurants. Symptoms include losing all taste in clothing, shouting the name of your country to everyone within earshot and then bursting into tears and madness as your team lose on penalties. Doctors are also warning that the world could see the greatest outbreak of mass hysteria since the Black Death in the 14th century, which may lead to many people dying of pneumonia as they lie face down in puddles of beer or lie in the street devoid of clothing.

Already, entire districts in some cities have seen a rash of flags appearing on the windows and doors of people's homes, an indication that everyone inside has gone down with the fever. In England, this has even reached the home of Prime Minister David Cameron's official residence at 10 Downing Street. In other countries involved in the World Cup, which is being held in South Africa, there have been especially virulent forms of this fever involving young fans painting their faces or jumping naked into fountains.

Organisations whose job it is to treat this fever are now saying they are running short of essential supplies including alcohol, pizzas, cheap tat merchandising and charcoal for the barbecues. In some countries the demand has been so high that desperate, fevered fans have been forced to suck frozen peas in an attempt to get their temperatures down--especially if their teams score a goal.

For those not infected with this deadly disease, the World Cup Fever has been a blessing so far. Many are saying that now they know where the ill people are, they can safely go somewhere else to escape the madness and live a normal life. One very popular choice is flying to the USA where cases of World Cup Fever (or Soccer Sickness as it is called there) are still relatively low.

The World Health Organisation has already wrung its hands--in anticipation that there is nothing they can do. They say that the "fever will eventually break" early next month. Then everyone will be able to get off their couch or sofa, or from the floor of a drinking establishment and then carry on their lives as if nothing had happened.