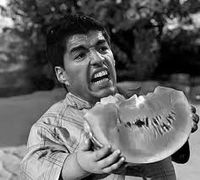 Suarez putting his teeth to good use for once.

With the news that Luis Suárez has been given a four-month ban from all forms of football (including FIFA 2014, table football and Subbuteo), UnNews has compiled a list of the ten darkest moments in football's long history.

While much has been made of Suárez's nibble, he might take solace from knowing he is not the first, nor the worst, World Cup biter. Indeed, it was a compatriot of Suarez, José Andrade, who was the victim when Argentine defender Muttis ate 3/4 of the Uruguay playmaker's arm. In those days there were no red cards or substitutions, so the referee told the players to shake hands and play on, although Muttis' actions had made the first of the two suggestions somewhat difficult to accomplish. 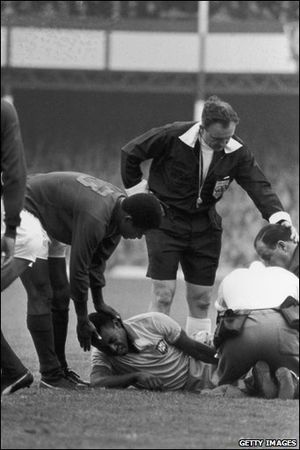 The great Pelé, searching in vain for his other testicle.

Pelé was arguably the greatest player to play the game, and graced three World Cups. He was set to mark his international retirement with a fourth in 1974, aged 34, but in a pre-tournament friendly with Germany, defender Martin Adler kicked the maestro so hard in the balls that one of his testicles "never came back". He retired from professional football, and went to play in the US league for money.

Voller and Rijkaard tangled - literally, their mullets became entangled and they headbutted each other - leading to both of them getting red cards. As they trooped off, Rijkaard spat directly into Voller's mouth, leading to the German contracting hepatitis, from which he died in 1997.

North Korea is not a famous footballing nation, although national records suggest that former leader Kim Jong-il was the best footballer of all time and invented the game. In 1966, they were struggling in the group phase and had to beat Italy in the last match. Thanks to a monumental group effort at halftime, during which they hacked to death the entire Italian squad with machetes, they eventually run out 1-0 winners, scoring in the 74th minute.

Maradona's controversial handballed goal in the quarter final distracted the English so much that no one noticed that Argentina had invaded the Falklands again. They remained in Argentine hands for two weeks. When Argentina won the final, the government called for four days of public celebration, and all the soldiers stationed in the Malvinas set sail for the nearest port, lured by the promise of sand, sex, sangria and no sheep. British forces stormed the island and replaced all the mate with PG Tips.

American beardie-man Lalas earned the USA a hard-earned draw against the much-fancied Colombians in round one, by paying Colombian bandits to shoot their own defender during the match. Escobar's prostrate corpse haplessly turned a John Harkes' cross into his own net, and he was soon substituted.

The country then known as Abyssinia only played in one World Cup, hosted by Italy in 1934. It did not end well for the Black Lions.

The Dutch had always been known as the game's great entertainers, but this changed in the final of 2010, when the team had a clear intention of bullying Spain out of the game. This culminated in a challenge in which Nigel de Jong kicked Xabi Alonso so hard in the chest that the latter's eyes rolled right back in his head and steam came out of his ears.

The moment Rivaldo was poisoned with gas. Note the split second delay between the ball exploding on his thigh and the gas hitting his face.

Everyone remembers Zidane's headbutt on Materazzi's chest, but it should be remembered the Italian struck first, breaking the Frenchman's heart by calling him the "gypsy Arab bastard son of a terrorist whore whose sagging breasts give sour milk". It's more succinct in the original Italian.

Rivaldo was much mocked for his apparently ridiculous reaction when Turk Hakan Ursal kicked the ball, hitting him in the thigh. The Brazilian maestro fell to the ground clutching his face in a seeming epitome of footballing histrionics. Only after the match did we learn that Ursal had filled the ball with radionuclide polonium-210, a poisonous chemical compound which caused Rivaldo's body parts to fall off one by one. Ursal was banned from the game for 9 months, and given a $100,000 fine.